The Fight of a Lifetime: An Interview with Ellen Zimmerman 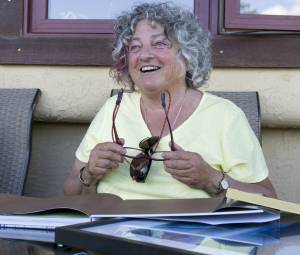 Lindsay Cuff: You just had a major victory in your environmental career: the third and final part of a boating regulation meant to protect the Columbia River adjacent to the Columbia Wetlands was enacted. How long was that in the making?

Ellen Zimmerman: Depending on how far you go back…when we were EKES (East Kootenay Environmental Society), we were involved in the CORE process in the mid-1990’s that resulted in the Columbia Wetlands designation in 1996. In 1997, the Province established a regulation under the BC Wildlife act prohibiting any conveyances over 10 HP. This was challenged in the courts and we became active as intervenors in the court process and in the education of the public at that time. That regulation was struck down in 2002 and it was then that we became co-applicants with the province for this regulation.

LC: So we’re definitely talking over 20 years here. How did that feel to have something finally come together after so long?!

EZ: Obviously it is a great relief and there is a good deal of satisfaction. I tend to the philosophical and, can see an unanticipated benefit to the delay. Specifically,
that it gave us opportunity for outreach and education and increased the general appreciation and awareness for the importance and value of the Columbia Wetlands.
During those years we achieved a few milestones, like the Ramsar designation in 2005.

LC: That’s an interesting thought, that long-standing campaigns fraught with many setbacks, etc. can actually be a means of getting the issue into the public’s minds and hearts.

EZ: And don’t forget our connection with Living Lakes International, which was established in 2000, and then we hosted an international conference in 2004.

LC: So no one was sitting around waiting for the regulation to come through, there was a lot going on that helped to propel the issue into the international spotlight. Do you have a favourite memory/story from the last two decades related to this campaign? A barroom brawl? A time you were astounded or surprised?

EZ: OMG where do I start????? So many. I think one of the little known stories is that John (Bergenske) and I made a decision to intervene in one of the court cases—it was the BC Supreme court case (which, by the way, found in the Province’s favour and was later overturned by the Court of Appeal). We were denied status and then the judge awarded court costs to our opponent and EKES had to pay! Well…as you can imagine, the EKES Board of the day (which was not overly enamored with us) took it out of our contract pay until it was payed. I think it took two months contract wages for each of us!

LC: No way! So basically you rabble rousers paid out of your own pockets.

EZ: Yep, out of our hides we paid. That would likely not happen today but they held us responsible. On a more cheerful note, there was my award as Canada’s first Women of the Earth award and a free trip to Paris and $7000 for Wildsight in 2006.

LC: Yes, I was just reading an old press article about your Women of the Earth award. That must have been incredible.

EZ: I could go on and on. Like the first proposal from Environment Canada to ban everyone, all boats from the whole wetlands seasonally from April to July 15 and the pushback I got when I brought that back. I remember thinking, I am dead meat when the canoeists and kayakers hear this.

LC: I’ve heard that’s a sign you’re doing a good job, when both sides are mad at you.

EZ: Having everyone mad at me is par for the course!

LC: (Laughs) I’ve heard that as well. So my next question is a bit philosophical (but you said you tend that way, so it shouldn’t be a problem for you). Why spend so much of your life fighting for one thing?

EZ: That is hard to answer, not sure I understand myself. I think it is in my nature to be tenacious, to never give up—from the start I committed to the long haul. Let’s face it, no one else wanted to do it. During those 20 years, much of Wildsight’s collective energies were channeled into Jumbo and the Flathead. So someone had to take the lead on the Wetlands. Also, I believed in the concept of limiting motorized access in sensitive habitats, and here we are dealing with an amazing ecological treasure that is ostensibly set aside for wildlife and where wildlife are supposed to come first. I felt obligated to give a voice to those critters who had no voice.

I think it is important for young people to be able to see the positive outcome of issues that stretched over years; and to not lose the history of what led up to our successes and failures in defence of the environment. Young people, especially, but also all people. I think history is less important to younger enviro activists, but it is relevant.

LC: Completely. If we lose the history, we end up wasting so much time relearning everything from scratch.

EZ: Also during that 20 years we worked to layer the protection on the Columbia Wetlands, with our affiliation with the Global Nature Fund and the Ramsar designation, bringing international awareness to the issue. We are still doing the layering with Rachel’s (Rachel Darvill) Columbia Wetlands Waterbird Survey—one of the goals of which is to achieve Important Bird Area status.

LC: So the work is ongoing. The more layers, the less chance everything can unravel. I just have one more question: If you could give people advice who are working on long-term protection campaigns, what would you say is the secret ingredient that you can’t win without?

EZ: From my personal perspective: tenacity. If one approach doesn’t work, keep coming back with different approaches. Obviously, sometimes we have to accept defeat, when there is something irrevocable, but when there is still hope, then never give up. I used to describe John and I as those kids’ punching bags, the kind that are weighted at the bottom, and you punch them and they pop right back up. That’s the metaphor I would use for advice.

LC: I like that image. Thanks, Ellen. And thanks for all your hard work.