Aerial insectivores, long-distant migrants, species-at-risk!  Who are we?

Do you know where these species are nesting in the Columbia Valley? If so, we want to hear from you!

Before implementing on the ground conservation actions, there was a great need to undertake inventory work to determine nesting locations for bank and barn swallows in the Columbia Valley. The main purpose of year one (year 2020) of the Columbia Valley Swallow Project (CVSP) has been to locate nest sites. Volunteer citizen-scientists have been trained and involved with monitoring. Breeding locations and nest monitoring information is already being used to inform the management of important swallow habitats and contribute to provincial and federal recovery planning and implementation processes.This project is also providing information to the public regarding the Migratory Birds Convention Act including obligations under this Act – we have been assisting private landowners with empowering education regarding their duties to protect nests. The illegal removal of swallow nests on private lands (due to human intolerance of noise or droppings) is of great conservation concern. Education and public awareness programs like the CVSP are needed to reduce the destruction of existing nest sites and colonies

In 2020, the Columbia Valley Swallow Project (CVSP) located approximately 100 bank swallow colonies in the region, indicating that the area between Canal Flats to Edgewater provides critical breeding habitat for this species. The CVSP also identified three large barn swallow colonies, all of which are under threat due to nest removal and/or future decommissioning of buildings. Swallow populations are facing additional threats such as habitat destruction, illegal nest removals, and large-scale impacts such as climate change.  This project is important as it works to halt and reverse the significant population declines facing two at-risk bird species.

In subsequent years of the CVSP, the emphasis will be on-the-ground habitat enhancement and stewardship, such as erecting artificial nesting structures in suitable habitat. A 5-year (2021-2026) Columbia Valley Swallow Habitat Enhancement Project is currently being developed with several partner groups.

With your help, we have an opportunity to help reverse the decline of swallow populations.

If you are interested in becoming involved with this swallow conservation project, please contact Program Biologist Rachel Darvill at racheldarvill@gmail.com.

Wildsight Golden would like to acknowledge financial and in kind contributions from the following organizations: 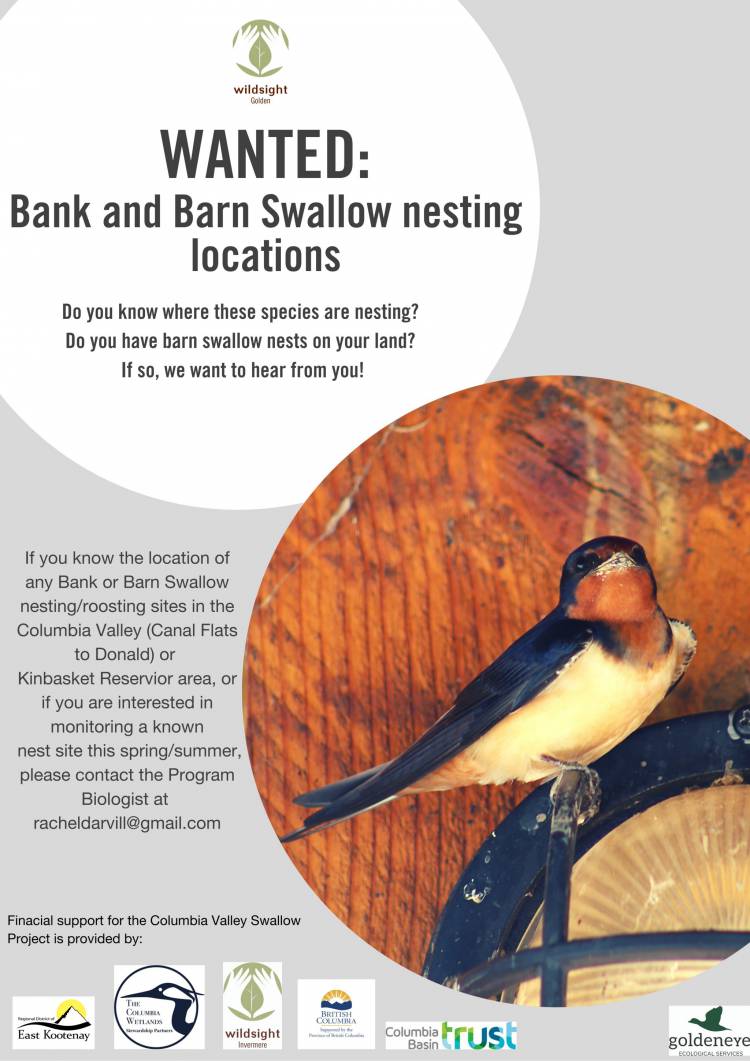 Click here for a link to a story about the decline of swallows and a bit about the Columbia Valley Swallow Project where biologist Rachel Darvill was interviewed on CBC.  This story is in french and was aired on July 3, 2020. Listen here

Our Golden branch focuses on the following programs:

This walk is not a harvesting walk, but will be an opportunity to identify edible and medicinal plants…

Reduce, Reuse, Recycle - What We Wear

Reduce Reuse Recycle – Out in the Wild

A lot of waste is generated camping and picnicking.  Through this series, there have been a lot…

As this series continues to be published in the paper, a number of people have provided Wildsight Golden…

Reduce Reuse Recycle – Where does our Recycling go?

It is important to do the three “R”s in the order they are. First Reduce, second Reuse…