It started as an expedition to track down the elusive mountain caribou.

David Moskowitz – renowned photographer, writer and wildlife tracker – had already written about the disappearing species a few times, but had never encountered them in the wild. With some time on his hands, Moskowitz set off to look for caribou in the Inland Temperate Rainforest (ITR).

While he did end up spotting a few of the legendary ungulates, what he took away was more than just some pretty pictures of wildlife.

Moskowitz went into the Selkirks and Monashee mountains, areas he was told had some of the best remaining inland temperate rainforest habitats. But what he saw made him stop: this globally-unique ecosystem was being torn apart, tree by tree.

“Seeing the rainforest coming down the road on logging trucks – old growth trees coming out of these places – it was really eye opening,” he says.

He simply couldn’t ignore the problem; seeing the liquidation of one of the rarest terrestrial ecosystems on planet earth forced him into action, to tell the story of the ITR and try to change the narrative from ruin to renewal.

“Caribou are still here. These big trees are still here. We’re still discovering new species never before known to science in this place. So, there’s huge opportunities. This doesn’t have to be a ‘once there was an inland rainforest’ story,” he asserts.

Moskowitz has trudged, trekked and traversed this rainforest over the past five years to uncover its secrets and share its depths. The message he wants to spread is there’s still an opportunity to preserve what is truly a unique ecosystem here. It’s not too late. Yet.

Moskowitz presented that vision in a webinar hosted by Wildsight December 1st.

What is the ITR?

The ITR stretches in a wide arc from the Cariboo Mountains east of Prince George to the Rocky Mountains bordering Alberta, dropping into the United States through Washington, Idaho, and Montana. Forty million acres. There are no other inland temperate zones on earth that harbour so many species typically associated with coastal forests. In its mossy depths, roots run deep, soaking up cool, clear water. Canopies stretch above, shading the plants that grow rich beneath spruce and fir, cedar and hemlock. A green carpet hides untold animal and plant life, some not found anywhere else on earth.

Hidden from the long arm of industry for years because of its inaccessibility, the Inland Temperate Rainforest lay protected. Untouched. Growing as it ever had for thousands of years. But what was once its blessing is now its curse, as industry pushes deeper and deeper into the last remaining strands.

“Big parts of the inland rainforest were protected just by the fact that nobody had gotten in there yet. Now we’re seeing these last pockets on the chopping block,” says Moskowitz. “We’re cutting old growth trees and turning them into toilet paper. British Columbia is mandating the liquidation of a lot of these forests.”

While there are pockets of the ITR left in the United States, what little is left is mostly protected now, Moskowitz says. And so this American wildlife enthusiast has turned his advocacy efforts northward to the last hope for this landscape: BC. The hungry timber industry fed a steady diet of ITR is devouring the remaining old growth.

“The timber towns are dried up ghost towns here in the US, because we did exactly what British Columbia is in the process of doing, which is just mining the forest essentially,” he explains.

Forests are more than the timber

What is often talked about in conservation circles is the big, towering timbers that need saving, or the almost extirpated (locally extinct) wildlife such as the charismatic caribou. But from the 100-foot trees right down to the soil, there is remarkable life worth preserving in the ITR. In his extensive travels through the rainforest with various experts in their fields, Moskowitz has encountered unique lifeforms not found anywhere else on the planet, like when he photographed a newly-identified species of jumping slug alongside the biologist who found it. Or when he trekked with a lichenologist who isolated a very particular lichen that only grows in the ITR on the side branches of hemlocks that grow underneath big cedar trees.

“It was awesome. And how many thousands and thousands of organisms have these really unique little niches in this ecosystem that we’re just now beginning to understand,” Moskowitz questions.

From an economic lens, forests hold far more value than just their timber, Moskowitz adds. For one, they are natural carbon sinks. Cutting forests takes them from helpful carbon absorbers to adding more fuel on the earth’s fire as they emit for years, even decades, after chopping. Forests help moderate climate, keeping things more moist and cool. They act as natural sponges, absorbing water and providing natural reservoirs.

“If you want to make the landscape drier and warmer, then you should cut the forest,” posits Moskowitz. “If you really do a full accounting of their economic value, I have no doubt the value of them standing is far more than the value of them as pulp for toilet paper or for cedar shingles.”

Gathering all that he had learned about the ITR after years of study, Moskowitz published Caribou Rainforest: From Heartbreak to Hope in 2018. The exceptional photography accompanies a depth of storytelling in this book that puts this rainforest on the world’s conservation map.

“The subtitle, ‘from heartbreak to hope’, is also a parable for conservation in our time,” he says. In the past, advocacy typically centred around specific endangered species. And trying to save a species in isolation is a failing endeavour. We need to save ecosystems, that will in turn save its inhabitants, he points out.

Moskowitz partnered with Wildsight to present a webinar on the Inland Temperate Rainforest. He shared an overview of the landscape, the plant and forest communities that define this rainforest, as well as how the ITR has shaped some of the human cultures in the region.

“I hope people leave a little more knowledgeable about an amazing landscape, and are inspired to take action in making sure that it’s there for future generations,” he shares.

Just before the election, John Horgan committed to implementing all 14 recommendations from the provincial old growth report. Please remind the newly formed provincial government that they must keep their promise and get to work immediately to protect old growth across the province.Take action 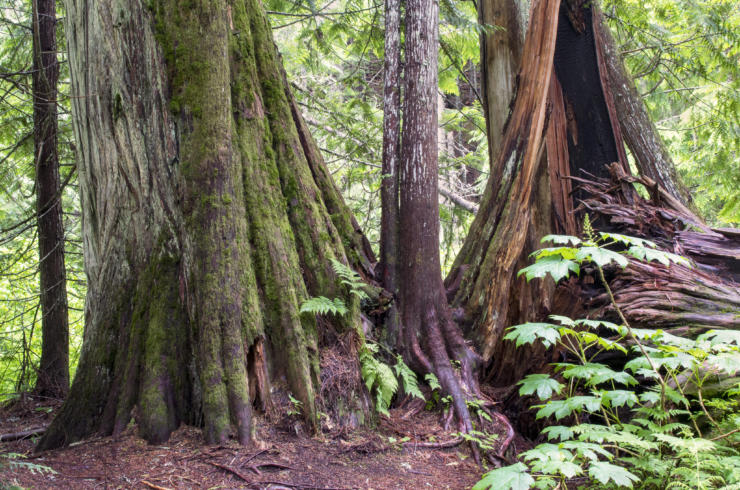 Lots of talk but little action on old growth protection

One year has passed since the release of A New Future for Old Forests, a thorough provincial old growth report, yet little has been done…Learn more