Posted on Tuesday, November 8, 2016 By Lindsay Cuff
Posted in:  Conservation

Wildsight’s Conservation Assitant, Eddie Petryshen interviews Mungo Tennant, the founder of Montesogno, an inspired apparel company that recently designed and donated a beautiful sweatshirt to the Jumbo Wild cause. Find out what inspired him to get involved.

Eddie Petryshen:  Could you tell everyone a little bit about your brand or company?

Mungo Tennant:  I started Montesogno just under two years ago because I wanted to step outside my everyday business world and do something that had a different perspective and felt rewarding in another way. I have always been passionate about animals and conservation and the interlinked aspects. I have been an admirer of good design, which I have been lucky enough to be exposed to through my work, which has been working with top architects and interior designers, and wanted to use some of my knowledge and enthusiasm to compliment both interests…Hence, the inspiration for Montesogno. Montesogno means “mountain dream” in Italian.

We work with a couple of UK-based conservation charities: The Whitely Fund for Nature, which has been working in animal conservation in Asia, Africa, and South America. They do direct award grants, which are held each year in April. David Attenborough is their Ambassador—he is considered, now in his nineties, as the Godfather of Conservation Narrative here…BBC Planet earth series etc. The other charity we work with is the Zoological Society of London, which does an immense amount of research, from cornerstone species to ecosystems.

We came up with an initial collection around three animals to try and highlight different aspects of the conservation crisis.

EP:  That’s great to know! I think the Purcells and the Jumbo area embody a lot of people’s “mountain dream.” They are wild, pristine, and breathtaking. So, you guys are very involved in conservation. Your company donates a percentage of the proceeds of every item sold to environmental charities. As a company, why do you think this is important?

MT:  I am sure they do—I will have to visit one day soon. We give a percentage to special programs, like we have done recently with the Amur Tiger for WFN, we also work on specific projects where we create a design and product and donate it to a cause. Sometimes animal designs and causes are hard to marry exactly, we try to be commercial so that we can generate revenues, and therefore proceeds, to causes. I think this is important as there is so much stuff out there that we don’t need—if you are going to put the time and effort into this you want to feel its not just another item…the planet doesn’t need that! That’s why it took us a little while to source the right quality sweatshirt for you guys.

EP:  As you mentioned, we recently collaborated on a Jumbo themed sweatshirt. Your company designed and donated these sweatshirts. 100% of the proceeds from the sale of these limited edition sweaters will go to the Keep Jumbo Wild campaign. What inspired your generosity? 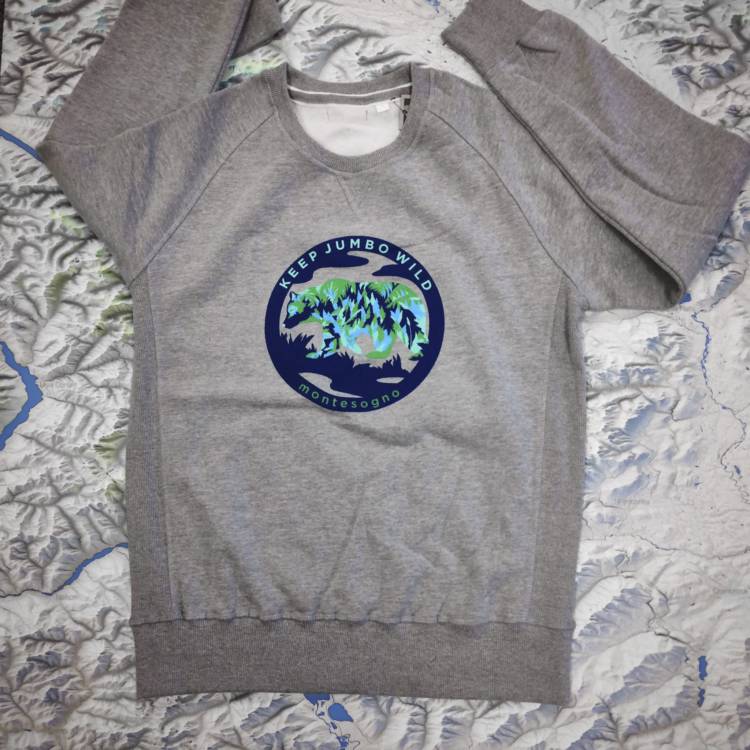 MT: The Jumbo Wild story really hit a nerve for me and I learned about this campaign whilst I was in the French Alps, where I spend a lot of my spare time ski touring cycling or hiking. Europe has a big population on a small land mass compared to BC and it just seemed so unethical to want to stick a ski station in the middle of nowhere—the impact was going to be disastrous. I have always been drawn to David and Goliath situations and clearly rooting for David. I understand the world of property development—that is my world—so it was all the more poignant. It felt like the “gold club syndrome” we have here in the UK and partially in Europe, where we had a boom in developing places where there were negative consequences for the environment, they never the membership targets expected, and quite a few have been closed down as a result. I just felt the Jumbo story had a similar ring to it…money was just focusing on getting it over the line…not so much about conservation impact or what would happen next. So i wanted to help in my own way. The Grizzly aspect is central, so I didn’t really need further incentive and wanted to do something that was potentially meaningful.

EP: I think it definitely is. You have a very interesting perspective given the fact that you have experience in the world of property development. So it was essentially the fact that you are opposed to unsustainable real estate and land development in the middle of very key wildlife and grizzly bear habitat?

MT:  That is the sum of it: it would do way more damage both short, medium and long-term than good.

EP:  The design is very powerful and really struck a nerve with many of us when we saw it in person here at the Wildsight office. The design feels very authentic, like you were inspired by the local landscape. But, correct me if I’m wrong, you have never been to the Jumbo Valley. So I’m curious to know, what influenced or inspired the design?

MT:  We’ve done a series of designs, especially on a larger format basis, where we try to reflect something about the animal’s habitat. The issues surrounding Jumbo gave us the excuse/inspiration to do the Grizzly. However, to print this on a sweatshirt we had to simplify some of the detail, but the inspiration was to try and bring some of the local flora into the bear and it was also important to complement the work and the identity that was already established. Hopefully this is the case!

EP:  Your design reflects that. So you’re based out of Europe (London) and felt compelled to contribute to this cause. We often say that this very local campaign has turned global. The importance of wilderness and wild places is something that everyone, whether in London or Canada or India, can identify with. I think your story embodies this. How do you think other people in far away places can contribute to causes that might at first seem local but are very global and are happening all over the globe?

MT:  One good thing about the world becoming more global is that we can share information to help each other. If there is a technology or environment enhancing breakthrough in one part, then you can share it with many other parties. So if something resonates in another part of the global village, we can also share and support each other’s campaigns. As we develop more and populations grow, silence and wilderness are so important to our sanity, for the animals, the planet…the global soul.

So initially, when you are not a local, it can seem a bit weird, but i think this viewpoint is changing as more people are helping other people’s campaigns. It makes sense: people power can be positive.

EP:  It’s very positive. And it’s connecting people who might have never met and this very conversation is a prime example of that. I think wilderness, wild places and keeping ecosystems healthy are just things that people inherently connect with regardless of who we are, what we do, or where we live. How do you feel when you’re in a wild place?

MT:  Mostly at peace, the serenity allows one to move into a different space and just enjoy being in nature and marvel at whatever is going on, whether that’s the cloud formation, migrating birds, or Alpine Ibex. It helps give me clarity and perspective on my life back in London

EP:  And that clarity is so important and renewing. There are many reasons, but what is the reason that stands out as the most important to you for keeping Jumbo Wild?

MT:  We need to keep as much of our habitat wild (everywhere), and with a valley like Jumbo, which is clearly so beautiful and has been appreciated and revered by the Ktunaxa people for centuries, along with the surrounding wildlife population, and today’s local communities who don’t want the development, it feels like a very bad piece of socio-environmental thinking. This is largely about making money for a few parties and not really contributing to a society that doesn’t need this, especially 25 years later when we are that much wiser about environmental impact

EP:  Thanks a lot Mungo!

Stay tuned for more details about where to get the sweatshirt! Donate to the Jumbo Wild campaign here.