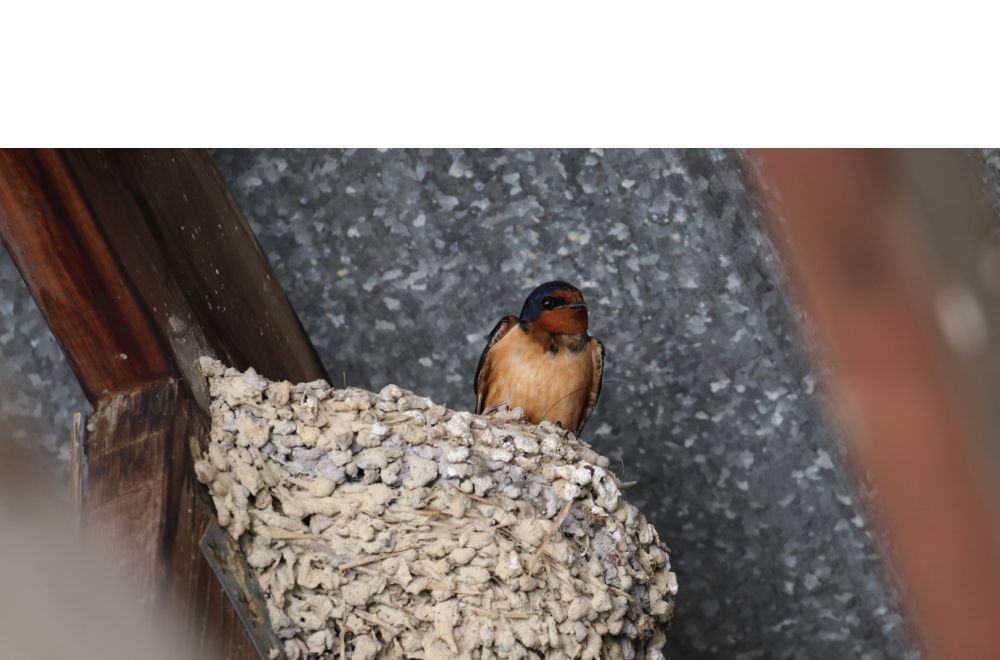 The barn swallow (Hirundo rustica) is one of the most widely distributed birds globally, but it is also a species at risk in Canada – its population facing a steep decline in recent decades. As the name suggests, since
European settlement barn swallows typically nest in buildings. But did you know that barn swallows often reuse their nests from year to year? Also, many barn swallows have two sets of chicks (or broods) a year and will
often use the same nest for both. Some nests have been reported to last up to 30 years! Barn swallows take around 14-20 days to build a new nest so leaving nests intact allow a barn swallow pair to establish a nest faster
than constructing a new one out of mud. The saved time can be better spent on raising more chicks and gathering more food – leading to a higher chance of survival and reproductive success.
However, barn swallows can cause a big and unwanted mess! Conflicts with swallows occur when the birds nest close to humans, primarily because of their poop and other debris they leave behind. In order to coexist
with barn swallows there are strategies that can be used such as affixing cardboard to the wall beneath a nest to catch droppings, which can be disposed of later. Another solution is to install a board under the nest to catch the droppings and debris. It’s best to do this ahead of the nesting season, which is normally May-September in our region.

Maintaining viable barn swallow populations is closely linked to the availability of nesting sites. Because nesting sites are usually anthropogenic (human-made) structures, measures to promote co-existence with nests
(e.g., cardboard to catch feces) are strongly encouraged to protect the long-term population health of this Threatened species. Barn swallows (one can eat up to 850 insects/day) have had an overall population decline of
76% in Canada in a recent 40-year period.

If barn swallow nests must be removed or modified in a way that would limit further nesting, individuals should reach out to ECCC (Enviroinfo@ec.gc.ca) to learn more about expected mitigation measures, such as
alternative nesting sites, as well as potential permitting requirements under the Species at Risk Act (SARA). If individuals are in the Columbia Valley, you may also reach out to the Upper Columbia Swallow Habitat
Enhancement Project (at swallows@wildsight.ca) as they can help with potential solutions. Individuals or proponents need to plan and conduct activities to be in compliance with federal legislation, such as the
Migratory Birds Convention Act (MBCA) and SARA, even if they have already been permitted by other processes (e.g., provincial or municipal permitting).

It is the responsibility of individuals and proponents to evaluate risks and determine the most appropriate avoidance or mitigation measures required, and fully understand their obligations to be compliant with the
SARA and MBCA. The information provided above does not authorize one to undertake activities prohibited under the Species at Risk Act and/or the Migratory Birds Regulations