In the Elk Valley, mountain-top removal coal mines dig up millions of tonnes of coal every year. When people ask questions about how these coal mines add to climate change, Teck is always quick to point out that the mines produce steelmaking coal, not the dirty kind of coal that’s burned to generate electricity.

But that misrepresents the problem. Coal is burned in the steelmaking process and nearly all of the carbon in the steelmaking coal ends up in our atmosphere as greenhouse gases. Steelmaking with coal is dirty. It’s an incredibly carbon-intensive process, responsible for roughly 5% of global emissions—as much as the entire aviation industry. When we follow the Elk Valley coal from the mountains to steel mills, it turns out that its greenhouse gas emissions are as much as everything else we do in the entire province of British Columbia!

Of course, while we can reduce our use of steel and recycle it, the world is still going to want steel (even, as we so often hear, to make wind turbines). Fortunately, there are much lower-carbon ways to make steel already in use today and the technology for zero-carbon steel is already here. The reason we keep using coal to make steel, using a process that hasn’t fundamentally changed in more than 100 years, is simple: it’s cheap.

All coal is bad news for our climate

Before we look at the alternatives to steelmaking coal, let’s take a closer look at the Elk Valley coal mines and the steelmaking process. Teck’s Elk Valley mines are major sources of direct greenhouse gas emissions. Huge amounts of diesel are used for heavy equipment and natural gas is used for drying coal. Plus, methane is released from the earth as the coal is mined. In total, the mines put out 1.7 million tonnes of greenhouse gases every year, as much as half a million cars and light trucks on our highways.1

Roughly 24 million tonnes of coal are shipped out of the Elk Valley every year—hundreds of train cars every day. From the Elk Valley, the coal travels by rail to the coast and then is loaded onto ships, mostly bound for Asia—and transporting that coal puts out more than a million additional tonnes of greenhouse gases.2

From there, the coal is converted into coke and then used in the blast furnace-basic oxygen steelmaking process. Coal does three things in this process: it is burned to supply the huge amounts of heat required, it supplies gases to strip oxygen from the iron ore and roughly 1% of the coal ends up as carbon in the steel. In the process, about 99% of the carbon in the coal ends up in our atmosphere, adding roughly 60 million tonnes of greenhouse gas per year to our carbon emissions, just from the Elk Valley coal mines.3 In total, the coal that starts out underneath the Rocky Mountains in the Elk Valley ends up adding to our global climate crisis as much as all of the emissions from all of British Columbia—that’s more than every car, truck, plane, building, farm, industrial site and gas well in our province. 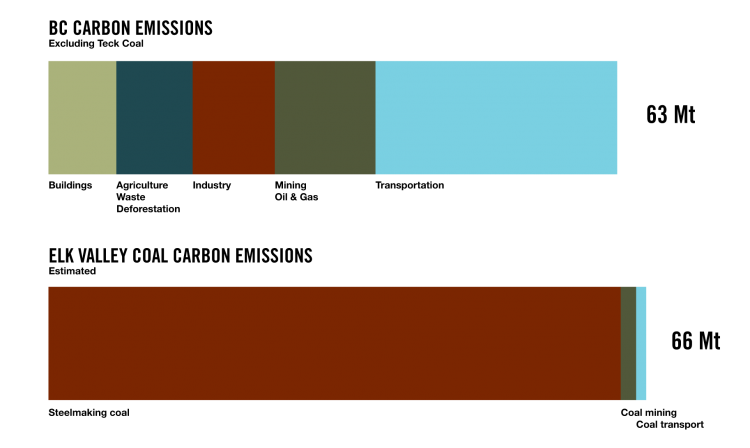 Why do we use coal to make steel?

We know that we need to reduce our carbon emissions by 80 or 90% if we want to avoid the worst effects of climate change, so it’s clear that we can’t keep burning coal to make steel. What can we do instead? The good news is that coal is not our only option. You need three things to make steel: a whole lot of heat, some way to remove oxygen to turn iron ore into iron and a little bit of carbon to turn the iron into steel. The carbon is easy, all you need is a little bit and it can come from anywhere: in Brazil, they use charcoal and scientists have used charred beet stems in the lab, but a small amount of coal or gas is fine too. To strip the oxygen from your iron ore, hydrogen is a proven option and can be produced from renewable electricity. Heat, which is the bulk of what coal is used for, is the simplest of all and can come from any energy source.

The biggest barrier to carbon-free steel isn’t technological. It comes down to dollars and cents. Coal is cheap because it’s just dug out of the ground. Renewable energy is more expensive, but that gap is closing every day. Coal is only cheap if we ignore the massive costs to the environment and our future when coal is burned. If we consider the full cost to ourselves and our planet of burning coal, renewable energy is without a doubt a lot cheaper than dirty coal.

The future of steel

Teck claims that a hydrogen process for steel is decades away4, but we simply don’t have time to wait while our atmosphere continues to warm up. Fortunately, multiple hydrogen-based steel pilot plants are already in construction around the world, including from the world’s largest steel-producing companies. We’ll need a massive effort to get this process producing at scale over the coming years and it’s clear that governments need to put pressure on the steel industry to move much faster.

In the meantime, we need to reduce our use of steelmaking coal as much as we can. Fortunately, only 70% of steel is made with coal today. The other 30% of the world’s steel production uses electric arc furnaces, fed with recycled steel or iron smelted with natural gas and hydrogen. Recycling is obviously a priority to reduce demand for new steel, but steel is already mostly recycled, so we’ll still need some new steel.

But we don’t need coal for the transition to hydrogen-based steel either. There are large industrial plants operating today that use natural gas to produce direct-reduced iron followed by an electric arc furnace to turn that iron into steel. In those plants, natural gas is cracked apart to make hydrogen, which makes up the bulk of the gas used to reduce iron and produce heat. Already these plants have about half the carbon emissions of coal-based steel plants.5 It would not be difficult to replace the hydrogen from natural gas used in these plants with hydrogen produced with renewable energy. Using renewable hydrogen together with a small amount of natural gas would drastically reduce the carbon emissions per tonne of steel compared to coal-based steel and would buy us precious time to scale up the world’s production of fossil-fuel-free steel. 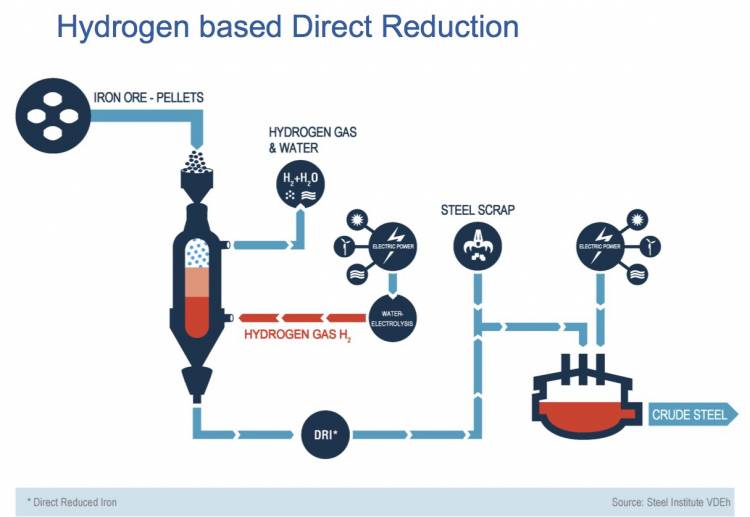 It’s time to start planning for a post-coal future in the Elk Valley. That means no more new mines or mine expansions, like North Coal’s proposed mines near Sparwood or Teck’s huge Castle expansion (send your comments on the environmental assessment today). It’s time to stop pretending that steelmaking coal doesn’t have climate consequences and start looking towards the huge task of trying to restore the 150 square kilometres of coal mines in the Elk Valley and the heavily polluted waters of the Elk River watershed.