A few weeks ago, I spent a few hot days in the Flathead Valley, often in the cold, clear waters of the tributaries of the Flathead River. The whole Flathead, which is the largest unsettled valley in Southern Canada, is recognized by scientists around the world for its pristine water quality. Wildsight, along with our now independent water program, Living Lakes Canada, was monitoring stream health in the Flathead using Environment Canada’s CABIN protocol (the Canadian Aquatic Biomonitoring Network).

While the water in the Flathead is very clean without human settlements or mining to sully it (which was banned in the Flathead in 2010), logging is always a concern. Improperly built roads, bridges and culverts can overwhelm small streams with sediment, while big clearcuts can increase erosion for many years. The more roads and especially road crossings of streams there are, the more sediment gets into our streams, harming all kinds of aquatic life, especially the bull trout and westslope cutthroat trout found throughout the Flathead. Over the past 5 years, we’ve been returning to the same five streams, not just to see the short-term impacts of logging, but to establish a baseline to compare against in the future.

In years past, we’ve taken CABIN samples in September or October. This year, with a stroke of scheduling luck, we ended up doing the sampling at the end of August. Quite the contrast to past years where snow was creeping down the mountains—it was hot, smoky and tinder dry!

The CABIN protocol, used across Canada by water stewardship groups, government scientists, and industry, uses the abundance and diversity of benthic macroinvertebrates (bugs that live on the bottom of a river, for the rest of us) as a key indicator of stream health. Healthy streams have plenty of bugs, with a good mix of species. When water pollution comes into the picture, some of the more sensitive macroinvertebrate species, like mayfly, caddisfly and stonefly, can’t survive, leaving only the hardier bugs. By running a very fine net through the water, we collect a sample of these little critters and send them to a lab taxonomist to be identified and counted under a microscope. For CABIN we also collect information about the riparian area along the stream, sediment levels, water chemistry like dissolved oxygen and pH, and basic stream measurements like flow and the makeup of the stream bed (with the always-exciting random 100 rock walk).

Overall, water quality in the Flathead continues to be excellent. That means we’re on the right track in our on-the-ground work with forestry companies in the Flathead Valley, checking logging and roads plans, visiting cut blocks and working with company and government foresters and biologists to make sure our water and our wildlife are protected in this special place.

With the new BC Government and Canada’s commitment to protect 17% of Canada’s landscape by 2020, we’re working hard to make sure critical areas in the Flathead Valley are protected from logging and recreation. And with the importance of the Southern Rockies for wildlife connectivity between Glacier National Park in Montana and the Banff Parks complex to the north, broader landscape protection to minimize the impacts of roads, mining and logging, while still allowing careful industrial use and recreation, is high on the agenda.

Making sure our rivers and streams in the Flathead stay clean while we work towards permanent landscape protections is why we are out in the Flathead doing CABIN sampling annually. And once this beautiful landscape is protected, let’s hope our water quality baseline from the last five years will show that our water in the future is even cleaner!

On our last night, after 3 days in the bush, we could hear thunder rumbling in the distance, but there was no sign of rain. The dry lightning storm that ripped across the landscape overnight ignited several fires throughout the Flathead that are still burning weeks later, including the Kenow Mountain fire crossed into Alberta’s Waterton National Park, running 15 kilometres in one night and clear across the park. We sure were lucky to have finished our work when we did! 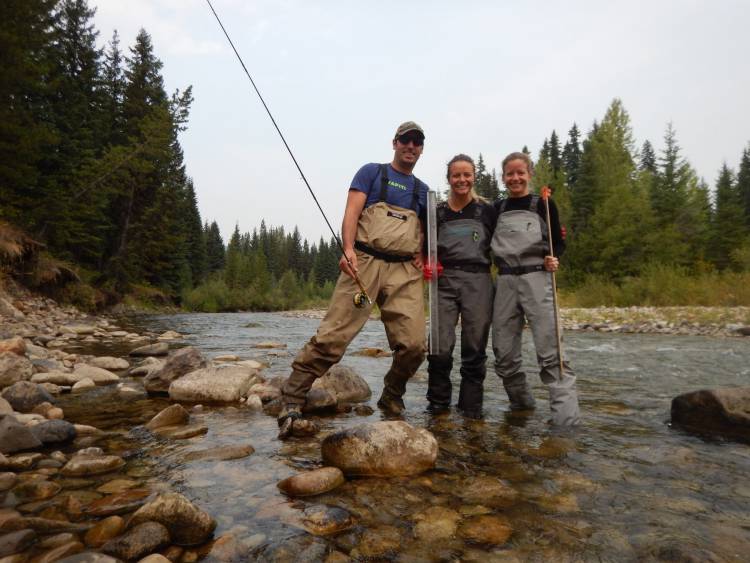 Top image: A caddisfly emerges from its case of silk and gravel in the clear waters of the Flathead Valley.