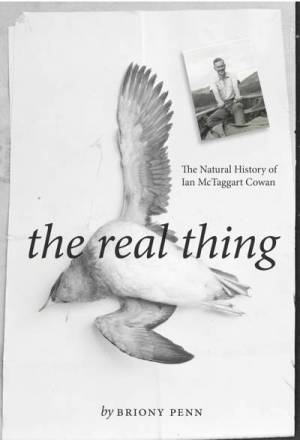 hor and professor, Briony Penn and her biographical tribute, The Real Thing: The Natural History of Ian McTaggart Cowan, for 2 special events on Sept. 29th and October 1st.

Ian McTaggart Cowan (1910–2010) was called the “Real Thing” for good reason. He was known as the “father of Canadian ecology” and not only did he revolutionize the way North Americans understand the natural world but he was ahead of his time in addressing issues such as climate change and endangered species. Some of his many milestones included:

In her evening presentation on Sept. 29, Briony takes the audience on a century long journey through BC’s mountainous landscapes into the world of Ian Mactaggart Cowan with characters that included muzzled scientists, activist trappers and gentlewomen naturalists. Excerpts will be read from the book and old photographs of his early research will be shown in addition to clips from his early CBC TV shows, The Web of Life. Briony recently won the Roderick Haig-Brown Regional BC Book Prize.