Tuesday, October 22, 7 to 9 PM at the Golden Senior’s Centre

In February 2017, Parks Canada began a 5-year pilot project to reintroduce North America’s largest land mammal (bison) to Canada’s first national park (Banff). Karsten will summarize the project and provide  some behind-the-scenes stories of the effort to restore this iconic animal to a place where it’s been missing for 140+ years.

Karsten Heuer is the Bison Reintroduction Project Manager for Banff National Park, a job he describes as the “most stimulating” in a 25-year career as a Park Warden and biologist in Alberta and the Yukon. He is also an award-winning author, known for his wildlife-inspired journeys undertaken with his documentary filmmaking wife, Leanne Allison (e.g. Being Caribou, Walking the Big Wild, Finding Farley). 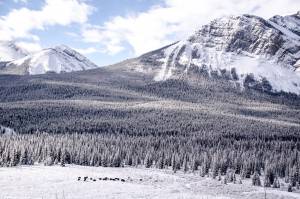