Posted on Tuesday, September 15, 2020 By Wildsight
Posted in:  Conservation, Featured

Late on Friday, September 11th, amidst the hubbub of families getting back into school routines and reporters itching to leave their desks for the weekend, the provincial government released the long-awaited old growth report.

The poorly-timed release lines up with the poorly-addressed government response to the report, begging the question of if the government was trying to bury the real news here. The report, A New Future for Old Forests, is the result of extensive travel and interviews across British Columbia by the report’s authors, Garry Merkel and Al Gorley.

The authors state in their introductory letter to the Minister, “Our recommendations are shaped by a recognition that society is undergoing a paradigm shift in its relationship with the environment, and the way we manage our old forests needs to adapt accordingly… We encourage you to consider our recommendations as a whole. Had previous old forest strategies and recommendations been fully implemented, we would likely not be facing the challenges around old growth to the extent we are today, i.e., high risk to loss of biodiversity in many ecosystems, risk to potential economic benefits due to uncertainty and conflict, and widespread lack of confidence in the system of managing forests.”

“The report presents a strong argument for change… Old growth across the province needs to be reserved until assessments are completed  and further protection is in place.” John Bergenske

The report authors present 14 recommendations for the future of old growth forests in BC. If all the recommendations are followed through on by the government, this would give ancient forests a strong chance at survival in the province.

“I am very happy with the report and compliment the report’s authors,” said Wildsight’s Conservation Director, John Bergenske. “We strongly encourage the provincial government to work with Indigenous governments to follow through on all of the report’s recommendations. I am hopeful that this signals the beginning of a change of direction in BC forest policy.”

The government’s response to this 72-page report was to put an immediate moratorium on old growth logging in nine selected areas of the province. However, when you pull back the glossy announcement and look at the reality, the shine comes off the initial news release.Eddie Petryshen, Wildsight’s Conservation Specialist, commented: “We applaud action toward protection of critical areas of the Inland Temperate Rainforest like the Incomappleux, yet areas of old growth in critical caribou habitat remain on the chopping block. We face a significant challenge and must hold the provincial government to its commitment to work with Indigenous governments in order to protect remaining old growth ecosystems as soon as possible. While areas important to biodiversity protection like Stockdale and Crystalline Creek in the Purcells are on the list, key old growth areas like Argonaut in the North Columbia mountains remain slated for logging.”

The government moratorium on logging of old growth forests covers over 350,000 ha of which only a small percentage is included in the Timber Harvesting Land Base (THLB). The Timber Harvesting Land Base is the area the Province allows logging to take place. For example, the moratorium of 9,595 ha in Crystalline Creek includes only 0.1 of a hectare in the THLB, while Stockdale’s 11,515 ha has only 233 ha in the THLB.“While both these watersheds are intact, have very high biodiversity values and need to be protected, most of the old growth in these drainages is not under threat as it is not in the areas allowed to be harvested,” said Petryshen.“There is no doubt that there is a lot to be done to address the crisis in British Columbia’s forests. The report presents a strong argument for change, the province’s reaction is disappointing. These initial old growth moratoriums will need to become permanent protection. Old growth across the province needs to be reserved until assessments are completed and further protection is in place,” concluded Bergenske. 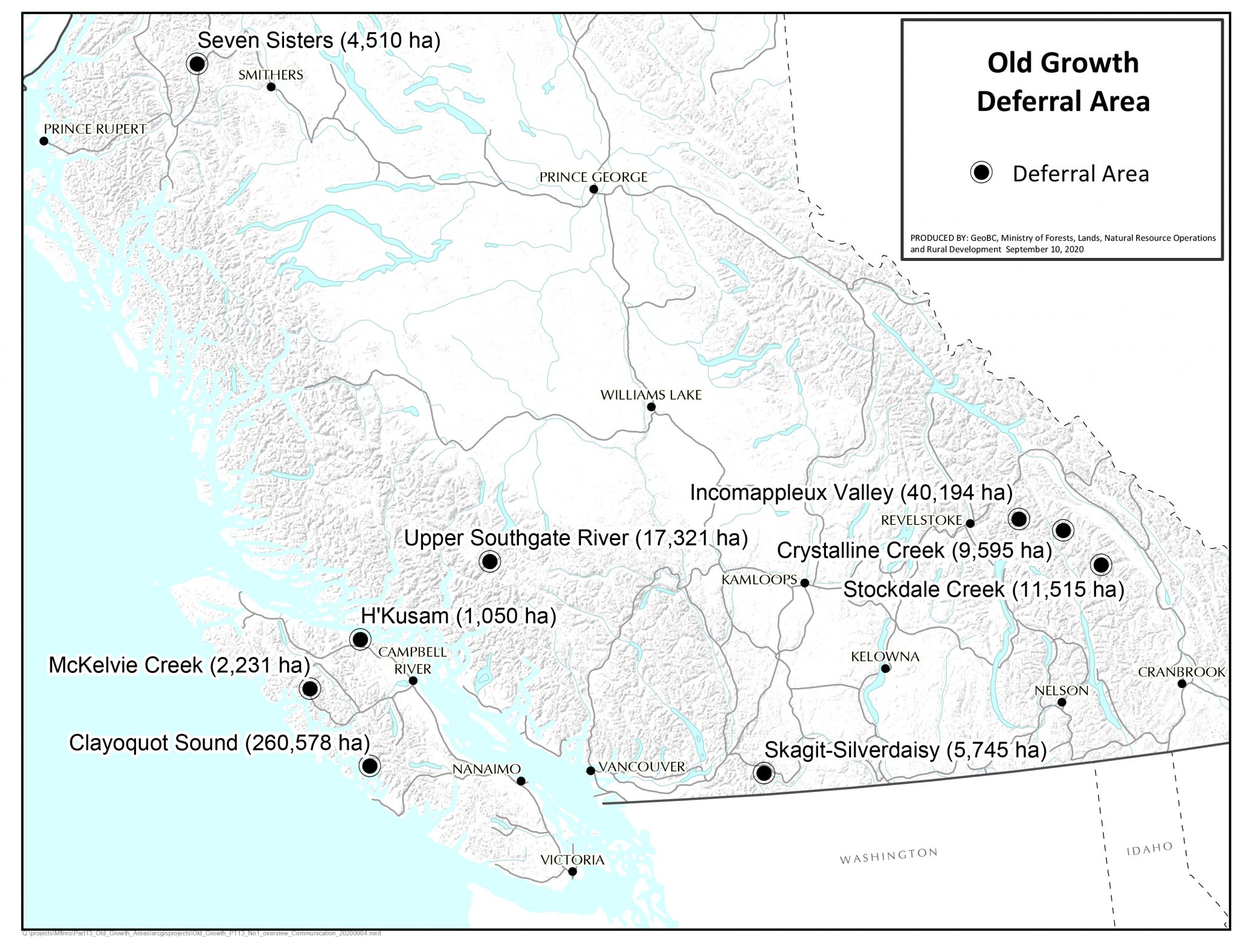