Grizzlies Need Room To Roam: An Interview With Clayton Lamb

Clayton Lamb is a grizzly bear biologist working throughout British Columbia. Lamb and his research team use genetic testing of bear hair as well as GPS collars to build maps of grizzly bear populations, tracking individual bears over years to figure out population dynamics and tease out the major ecological factors that drive bear populations. I sat down with Clayton to talk about what inspired him to study grizzlies, his research, and his upcoming grizzly talks in Cranbrook on Wednesday, April 4 and Fernie on Thursday, April 5.

Eddie Petryshen: What inspired you to study grizzly bears?

Clayton Lamb: The first grizzly bear I laid eyes on was in the Kettle River area (north of Rock Creek) and it actually charged my dad and I. I was 10. I cried.
We survived, so did the bear; we kept our cool and everyone went home safe. So that experience, paired with a passion for the mountains and wildlife really inspired me. I was offered a perfect project working on grizzly bears with the Province of BC and University of Alberta, so I took it.
But my interests extend much further than grizzly bears. I am most interested in the factors driving any wildlife population dynamics (elk, deer, moose, fox, waterfowl, etc.), especially at large scales. Grizzly bears are a great species to ask this type of question about, so it’s been a good fit. 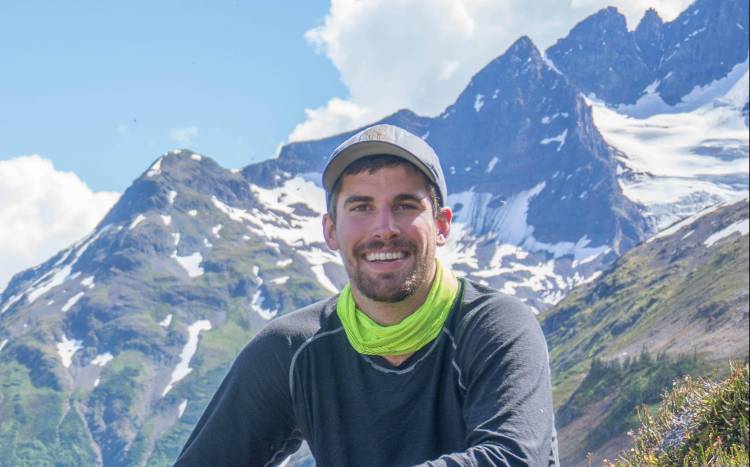 EP: Have you ever had an experience where you felt particularly close to a bear in your fieldwork?

CL: I think the scientific answer is supposed to be “no, they are just study animals for research” and in some ways that is true, especially with the DNA work we do where we only collect hair to identify an individual and rarely interact with the bear. However, when we capture bears and track them with GPS collars, you do get to know them as individuals in some ways, and I am often sad when they die or happy when they have cubs. But my main focus is always on the population level, so happiness for cubs or sadness about a mortality is more about what it mean for the larger populations viability. Right now, I’m wondering when the bears are going to start waking up and I’m excited to see who wakes up first!

EP: Can you tell us a little more about your research and what you will be speaking about in Cranbrook and Fernie?

CL: My talk will focus on the major ecological drivers of grizzly bear populations across the Rockies, Purcells and Selkirks, especially the effects of food supply, habitat loss and roads.
Grizzly bears were historically an apex species, meaning they had no natural predators, so grizzly populations were mostly limited by food supply. However, when humans and bears share space, grizzly bear populations can be limited by human factors like land use or roads.
For example, when a new road leads more humans into productive grizzly bear habitats we see fewer bears because of increased mortality and habitat avoidance. Towns in bear habitat can inhibit bear movements across the valley and also increase mortality. But there’s still important habitat across British Columbia for bears to thrive in— and we need to protect these areas for bears and other species.

EP: What are a few of the key steps or things we can do to ensure that we have healthy grizzly populations here in Southern BC?

CL: Southern BC, and especially the Kootenays, has phenomenal grizzly bear habitat. With avalanche chutes giving a spring bounty, huckleberry fields, and even spawning Kokanee salmon, grizzly bear populations have always been high in this region. Grizzly bear densities in and around the Kootenays are 2-5x higher than Jasper and Banff!
However, human presence in productive grizzly bear habitat can make it less effective and can also increase bear mortality. Generally, humans end up in grizzly bear habitat in high numbers through either living in bear habitat (most towns in the Kootenays, think Fernie), or accessing backcountry bear habitat for recreation on logging roads. In towns, it is important to manage attractants, especially fruit trees. Municipalities in bear habitat that see a lot of bear conflict might consider a tree replacement program where residents can have their fruit producing trees (especially those that humans rarely eat-crab apple etc.) with a different non-fruiting species. Similarly, the Kootenays has thousands of kilometers of logging roads and few unroaded valleys remain, it is essential to maintain intact areas so that bears have some areas where they can use productive habitat undisturbed by human presence.
Fire suppression has also worked to reduce open habitats where productive bear foods grow. Controlled burns would help bear food supply.

EP: Over the last eight years there’s been a 40 percent decline in the grizzly bear population in BC’s Southern Rockies region; what’s caused that decline?

CL: The South Rockies region is a very interesting case of cumulative effects. The main reason for this decline is thought to be a decade with less berries than usual that both decreased reproduction and brought bears into more conflict with people, leading to bear deaths, especially in the Elk Valley and the Rocky Mountain Trench. Mortality rates in the Elk Valley are among the highest in North America and the area has the highest non-hunting mortality rate in BC. This high mortality rate in the human-settled portion of the South Rockies is certainly a major part of the 40% decline.
But for bears in this area, roads, rail, human-wildlife conflict, poaching and hunting (in earlier years) are all factors.
The good news is that the populations in the Elk Valley appear to be slowly recovering, perhaps due to increased food production in recent years.

EP: Sounds like grizzly bears face a lot of challenges in the Elk Valley in the area your research team has called an “ecological trap” due to this perfect storm of road, rail, and human-wildlife conflict.
What’s the worst and best part about being a grizzly bear biologist?

CL: The worst part is that I spend a lot of time carrying around gallons of rotting cow blood in order to lure in bears to our hair sampling sites. The best part is that all summer, I eat huckleberries and catch bears for a living, then the bears den up and I ski and work at my computer all winter. It’s a fantastic life!

EP: Thanks for your time Clayton!

Join Clayton for his talk Running out of Room in Cranbrook on April 4th at COTR and in Fernie on April 5th at the Arts Station.