Plastic-Free July: The History and Myths of our Plastic Age

Plastics have pervaded all aspects of life in the 20th and 21st centuries, so much so that these centuries have been dubbed the Plastics Age. As you read these words, it’s likely that several different types of plastic are within reach: components in your computer or phone, fibres in your clothing, coffee or food containers, and even microplastics in your blood or respiratory system. Over 340,000 tonnes of plastic were disposed of in BC in 2019, which amounts to 150 lbs. of plastic in the landfill per British Columbian that year according to the Government of BC.

Celebrate Plastic-Free July by diving into the plastics issue—from the history of plastic to the actions we can take to move towards a brighter, less plastic future.

The Rise of Plastics

Plastic is a loose term for materials that can be formed and moulded under pressure and heat. Modern plastics are made up of a chemical class of materials called polymers. These are large molecules made up of a chain of smaller repeating molecules called monomers. We think of plastics as a modern material, but natural plastics like amber, rubber, horn, tortoiseshell, and shellac have existed since antiquity. Certain animal-derived materials grew scarce in the middle of the 19th century, including ivory from elephant tusks and shells from turtles. With animals facing extinction, inventors tackled the environmental issue by patenting semi-synthetic plastics. In 1862, Birmingham-born inventor Alexander Parkes patented Parkesine, a cheap and colourful substitute for ivory and tortoiseshell.

By the 20th century, the plastic revolution was underway. Belgian chemist Leo Baekeland patented the first fully synthetic plastic in 1907, famously beating rival James Swinburne to the patent office by one day. He called it Bakelite and it contained two chemicals: formaldehyde and phenol. Bakelite was the beginning of a consumer boom that offered highly desirable yet affordable products. Polyethylene was discovered by accident in 1933, resulting in a strong, flexible, and heat-resistant new material. First used to insulate radar cabling in WWII, it soon appeared in everything from consumer plastic bags and Tupperware to space suits.

Once seen as a wonder material, we now know that the chemical properties that make plastics useful have also led to a major environmental issue. Simply put, plastics are abundant and difficult to dispose of. Contrary to the lyrics in the Toby Keith song Red Solo Cup, it takes hundreds to thousands of years for plastics to biodegrade—not fourteen. The modern plastics industry sources its raw material from the fossil fuel industry and contributes to global C02 levels. Plastics also break down into microparticles that pollute our ecosystems, oceans, air, and bodies. Plastic waste is so out of control that Earth is now home to the Great Pacific Garbage Patch, microplastics have been found in the deepest part of the ocean, and just this year, microplastics were found in human blood for the first time. 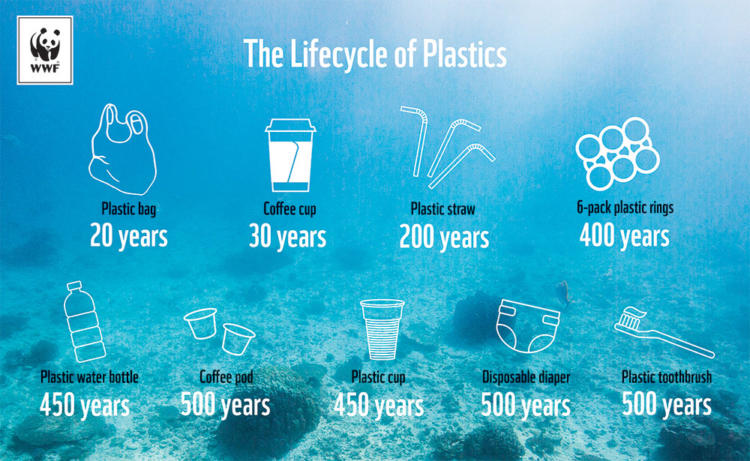 If plastic was created to resolve an environmental issue, how did things get so bad? (Stick with us because this ends on a positive note…)

What if the way we think about plastic perpetuates the problem? An article called “Plastic Recycling Doesn’t Work and Will Never Work” published by the Atlantic points out that the plastics industry is following the tobacco industry’s playbook by perpetuating a myth. The article claims that, “Although some materials can be effectively recycled and safely made from recycled content, plastics cannot. Plastic recycling does not work and will never work.” The first problem with recycling plastic is that there are now thousands of different plastics that cannot be recycled together, and we do not have the capacity to sort trillions of pieces of plastics for processing. The second problem with recycling plastic is that it is a wasteful, energy-intensive, and dangerous process. Furthermore, plastics can be made with toxic additives or easily absorb other chemicals; therefore, toxicity risks in recycled plastic prohibit “the vast majority of plastic products and packaging produced” from being recycled into food-grade packaging. The article ultimately highlights that, “Plastic recycling is simply not economical. Recycled plastic costs more than new plastic because collecting, sorting, transporting, and reprocessing plastic waste is exorbitantly expensive.” Has the idea of recycling plastic actually led to more plastic consumption?

We’re not suggesting that people give up on recycling. In British Columbia, a province that’s considered to be a leader in plastics recycling, 46 per cent of all plastic materials are recovered according to Recycle BC. That’s certainly something. Rather than give up, we should be more careful about the way we sort plastics. There’s also a strong case to be made for reducing our demand for new plastic.

On a positive note, Canada is banning the manufacture and import of single-use plastics by the end of 2022. The ban follows Prime Minister Justin Trudeau’s 2019 promise to phase out plastics and will eliminate more than 1.3 million tons of plastic waste over the next decade — the equivalent of 1 million garbage bags of trash — according to CNBC.

In addition to government legislation, we have the power to make choices and take action. We can learn more about plastics, question our reliance on such a detrimental material, seek alternatives, and turn the tide. We may not solve this problem overnight, but we can start changing our relationship with plastic right now.

Going entirely plastic-free in this world is a challenging feat—yet there are dozens of simple ways to reduce the amount of plastic in your life. Less is more and every action counts. If you’re inspired to take some action, here are a few ways you can change your relationship with plastics: