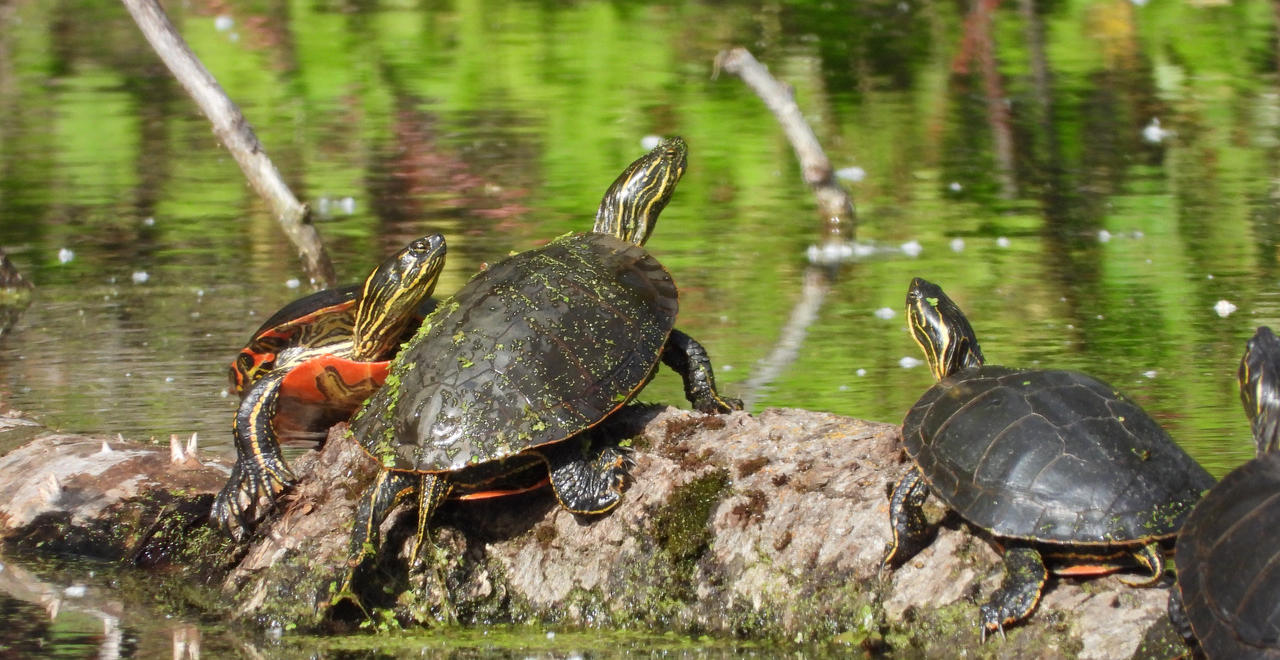 Turtle power in the Creston Valley

Road mortality is a major threat for turtles across B.C., including those in the Creston Valley Wildlife Management Area (CVWMA). These slow-moving creatures leave their watery homes in search of ideal egg-laying locations, like gravel roadsides with south-facing slopes and very little vegetation. For turtles in the CVWMA, that often means crossing the West Creston Road that runs through their habitat.

To help encourage turtles to stay off roads, sand and gravel nesting beds were built away from roadsides. To further deter the turtles from returning to nesting grounds along the road, approximately 1.5 km of fencing was also installed a number of years ago.

The turtles here are part of the Intermountain-Rocky Mountain population (found in the southern interior of B.C.) Turtles are “relatively common” throughout the Creston Valley bottom, Marc-André reports. As the only native freshwater turtle in BC, the Western Painted Turtle (sometimes referred to as the Northern Painted Turtle) have a lot of barriers to a healthy population.

Threats (to this turtle) as listed in the Conservation Status Report, including transportation and service corridors, residential and commercial development, agriculture and aquaculture, biological resource use, human intrusions and disturbance and natural system modifications (COSEWIC 2016d; B.C. Ministry of Environment. 2017).

Turtles face other threats, some not as straightforward to fix. For example, the BC Conservation Data Centre notes, “There is a significant loss of wetlands due to filling and draining to increase land for cultivation and development. Death from injuries from being hooked by fishermen have also been observed. Recent expansion of the raccoon (Procyon lotor) has likely reduced nesting success and led to increased mortality of hatchlings and nesting females.”

In the Creston Valley, adds Marc-Andre, turtles face an additional threat from skunks, known to wipe out over 90% of local turtle nests in the summer. Invasive species are also a concern.

The fencing alongside the West Creston Road reduces at least one of the threats to the local Western Painted Turtle population. However, the fence requires constant maintenance, with snow, water and vegetation breaking down the barrier over time.

Wildsight Creston was looking to do a volunteer project, and approached Marc-André for ideas. The decision to work on fencing was an easy one. It was a good fit for both organizations, as the CVWMA can always use volunteer power, and Wildsight was able to gather together a solid group of about 14 to work on the project recently.

Melissa Flint, Wildsight Creston branch manager, says it was great to gather together to work on a project that directly benefits wildlife. Jim Smith, a director with Wildsight Creston, agrees.

“Quite a few people brought their kids, so it was a family affair,” Jim describes. “Initially, there was curiosity about what to do and the conditions. But once people got started, they dove right in.”

Volunteers restored turtle fencing between the Discovery Centre parking lot and the old service road to the north, as well as cleaning up some weeds and raking the gravel at the turtle nesting area beside the parking lot.

“The work ethic was great and people worked in ad hoc groups along the fence. The two hours went by quickly, and we all felt a sense of accomplishment once the section was finished,” Jim shares. “Because it was work to keep the turtles safe from the road and provided ideal nesting, people really brought into the project.”

If you live in the Creston Valley (or just want to visit the valley with a purpose), you’re invited to Creston Wildsight’s next turtle fence work bee on Saturday, June 4th. To learn more about the Creston Wildlife Management Area, visit their website.