Zincton is back: Big resort, big losses for wildlife

The proposed Zincton Resort is a massive ski resort development that would cover 55 square kilometres of the Central Selkirk mountains between Kaslo and New Denver. The proposed resort passed the first stage of review from the BC Mountain Resorts Branch, and is now in the second public comment period phase until November 23.

The developer (David Harley) says he wants to make these wild mountains like Switzerland: a ski resort for up to approximately 1,300 users daily, a real estate and village development in the middle of the mountains, and year round recreation in the middle of important wildlife habitat. Environmental concerns, cumulative impacts and community concerns noted in the first public comment period have not been properly addressed in Zincton’s updated application. The proposal fails to mitigate the fragmentation of key grizzly bear and wolverine corridors, and prevent the degradation of mountain goat habitat.

The public comment period for the second stage of their proposal is open until November 23; this is your chance to speak up. Listed below are ways that you can take immediate action to defend wildlife in the Central Selkirks. We have included key issues with the proposal for talking points, and provided further context on the impacts of Zincton, below.

Take Action Now: Here’s how to defend wildlife in the Central Selkirks

Submit your comments to the Mountain Resorts Branch public engagement portal open until November 23, 2021. Consider using our key issues listed below and highlight why this matters to you.

Follow our friends at The Wild Connection for local updates in the area.

Key issues with this proposal:

More information on the proposal: 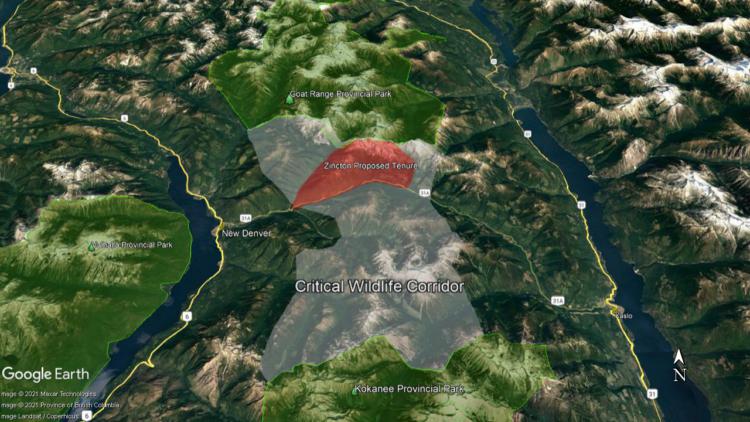 The Central Selkirks are the most heavily-tenured (business licenses to operate on crown land) adventure tourism area of the province. Intensive backcountry development and recreation are already stressing sensitive wildlife populations.

The proposed area overlaps with existing two tenures: Retallack cat skiing and Stellar Heliskiing. There are also pending applications for further tenure amendments by Retallack and a new tenure application by Lyle Creek Lodge. More people, more buildings and a developed ski hill will intensify the problems already evident from human encroachment on this landscape.

The animals that live on these lands will be cut off from each other, making it harder to maintain genetic diversity in species like wolverines and grizzly bears. The Central Selkirk Mountains are a crucial connectivity link and core habitat for grizzly bears, including many areas with dense huckleberries that are important for grizzlies, especially females. Development within the corridor, including intensive all- season usage, will displace grizzlies from important habitat and threaten connectivity.

With highly-used goat habitat in parts of the proposed development, the impact on goats would be significant too.

For wolverines, the Central Selkirks are a crucial connectivity link and core habitat. Areas north of Highway 31A have amongst the highest wolverine density in the West Kootenay region. The project will result in habitat loss for females in particular, who avoid high levels of non-motorized, dispersed human activity (Heinemeyer et al, 2019) both within the boundaries of the lift access and with substantially increased access to adjacent, more remote, valleys. The project will also greatly increase traffic volumes on the Highway 31A corridor which in the past has not been a barrier to wolverine movement. This increase in traffic could result in the loss of wolverine connectivity across Highway 31A due to higher traffic levels and human activity along the corridor.

From poor planning to protect wildlife to increased environmental impacts in an already heavily-utilized area for recreation, this project just doesn’t make sense. Existing ski resorts already have trouble filling the beds they have and another ski resort will cause lasting damage to an area in need of greater protections, not less.

Please take the time to speak up for grizzly bears, wolverines, and mountain goats today.