Raise the Roof for Barn Swallows

Posted on September 7, 2021 by Wildsight Golden

The Columbia wetlands, a globally-recognized natural treasure, plays host to all manner of aquatic and avian life, including bank and barn swallows. With two of seven types of swallows in Canada facing population declines in Canada, these life-sustaining wetlands and the surrounding areas are amongst the best places to target swallow recovery efforts.

Rachel Darvill, an independent biologist under contract with Wildsight Golden, has begun a five-year study of barn and bank swallows in the Columbia Valley from Canal Flats to the Kinbasket Reservoir.

The five-year project includes plans to install at least eight artificial nesting structures for barn swallows. The first two were installed this summer. Locations have been selected based on various factors, including: places where nests are known to be removed due to health/aesthetic concerns, where current nesting structures are going to be destroyed in the future, or in areas that they exist already to increase their numbers in areas deemed to be good swallow habitat where barn swallows already exist. Greater connectivity and larger breeding areas enhance the area that colonists such as bank and barn swallows can use, allowing for increased bird abundance.

“Barn swallows like to reuse the same breeding places year after year; they may construct an entirely new nest or they may use old nests,” says Darvill. “They like to scope out (structures) a year ahead, so we’ve started to erect these artificial nesting structures in suitable locations this year in hopes they’ll nest in these new locations as soon as next spring.”

The eight ‘barns’ will be built with different footprints and roof types, and openings ranging from small to a completely open side. The structures will be monitored — largely by volunteers — for their effectiveness over the next four years to help understand some of the barn swallow’s preferred nesting parameters (i.e. roof type, size, amount of opensess).

The structures this year were modeled after a design that has been used (and found to be effective!)  in the Creston Valley Wildlife Management Area.

Darvill is implementing a number of tactics to encourage swallow populations in the Upper Columbia region, including the installation of artificial nest cups. These cups can enhance structures to make them more attractive to barn swallows. Several private landowners have jumped on this opportunity, and the Windermere Lake District Rod & Gun club constructed 42 such nest cups this year for this project to distribute. So far, the nest cups have been erected on outbuildings already in place and on the artificial nesting structures that the project is erecting.

“These nest cups can give barn swallows a good head start as they mimic the size and shape of natural mud nests and allow for the swallow to establish a nest faster than constructing a new one out of mud,” Darvill says.

There are still a few nesting cups available, which Darvill is hoping to install this year somewhere between Parson and Donald so contact her if you are interested. They will be erected in other areas of the valley in subsequent years. These nest cups are erected in areas where there are already nesting barn swallows, they must be kept away from predators, and be sheltered with a roof. 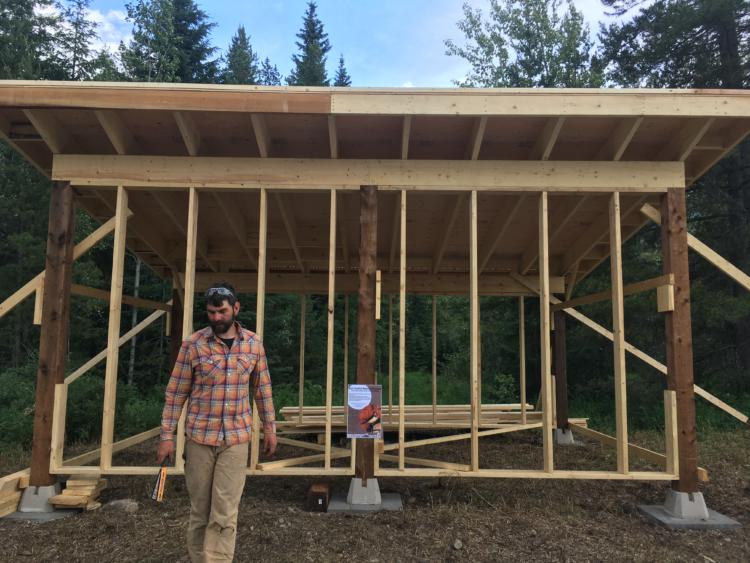 ALL PHOTOS are by Rachel Darvill