Standing up for BC's forgotten rainforest

On a bright and hot summer afternoon, on a dusty logging road near ancient giants, Splatsin First Nation Kukpi7 (Chief) Wayne Christian is conducting a ceremony to protect a group of Revelstoke locals putting their bodies on the line to protect old growth. The group is known as Old Growth Revylution and they’ve set up a blockade 120 kilometres north of Revelstoke.

As scientists are sounding the alarm that the Inland Temperate Rainforest is on the brink of ecosystem collapse, citizens, Indigenous leaders and some Nations are taking action.

Last summer, we uncovered BCTS plans to log an untouched watershed north of Revelstoke that would have seen ancient cedar and hemlock forests levelled. It broke my heart to think that we would destroy the Argonaut Valley, home to endangered mountain caribou. Once we raised the alarm, thanks to public and First Nation pressure, BC deferred the sale of 11 of 14 logging blocks in Argonaut Creek. But in June, 150 soccer fields (126 hectares) of low elevation ancient old growth was logged by Downie Timber under contract by BCTS in the adjacent Bigmouth Valley. In the absence of leadership from the provincial government, British Columbians are sounding the alarm and taking action.

So far, the blockade has been manned by a small group of land defenders intent on protecting the ITR near their communities. On this particular day at the blockade, Kupki7 Wayne Christian is accompanied by Regional Chief of the BC Assembly of First Nations, Terry Teegee. Marlene Squakin, an elder, knowledge keeper, and member of the Sylix Nation is also in attendance and part of the ceremony, as well as a representative from the autonomous Sinixt. Before the ceremony BC AFN Regional Chief Terry Teegee conveys his gratitude to the land defenders and the challenges he’s faced working with BC Timber Sales.

Splatsin First Nation and Kukpi7 Wayne Christian conducts a powerful ceremony to protect the land defenders. Kukpi7 bestows the land defenders with individual tobacco ties. After the ceremony, the tobacco ties are joined together, connecting perfectly around a two-plus-metre diameter ancient cedar. It’s a moving show of solidarity.

Kukpi7 Christian speaks about his Nation’s connection to caribou and how caribou provided his people with sustenance, clothing, tools, utensils, snowshoes and other necessities important to Splatsin physical and cultural survival.

The Splatsin First Nation have made it clear that B.C., and specifically BC Timber Sales (BCTS), need to cease all operations in the Bigmouth and Argonaut areas. In a July 7th press release, the First Nation called on the BC government to reduce the Annual Allowable cut and take “immediate action to halt any further irreversible logging activities in these remaining old-growth interior temperate forests, and until the culturally significant southern mountain caribou, and their critical habitats are protected and secured for future generations.”

The Ktunaxa Nation issued a statement saying the Argonaut area in question is vital mountain caribou habitat and any threat to the caribou or all living things in this region is of great concern.

Later that week at the blockade, Downie Timber and Gorman Brothers CEO Nick Arkle and staff visit the Old Growth Revylution blockade. Downey owns the cutting rights to one old growth block just to the West of Argonaut Creek. It’s the block that is most immediately threatened by logging. After significant dialogue, Downie agreed to hold off on any logging or road building in the area. While this is a major progress, there is so much more to do to protect our few remaining patches of old growth and caribou habitat.

For me, it’s a sad state of affairs when people are forced to put their bodies on the line to protect globally unique ancient and at-risk old growth. It speaks to both the current and past failures of our provincial government to protect old growth. But it’s where we are as a province.

The longer the province drags its feet and stalls on old growth and caribou protection, the more likely these blockades become. People are fed up with the status quo and they are willing to fight like hell to see these old growth forests stand another day, another year.

​​It’s clear to me that British Columbians of all walks of life are coming together and fighting for our forests now, harder than we ever have before. It’s not going to be easy to change the entire paradigm in BC forestry, but I believe it’s possible.

Just before the election, John Horgan committed to implementing all 14 recommendations from the provincial old growth report. Please remind the newly formed provincial government that they must keep their promise and get to work immediately to protect old growth across the province.Speak up 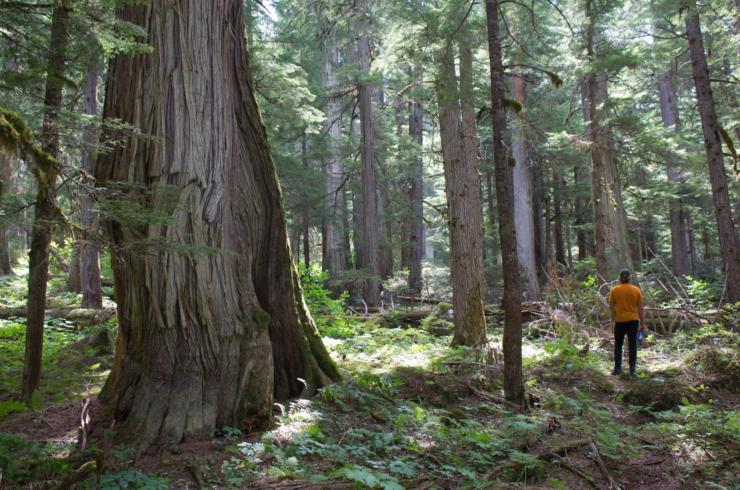 Have you ever walked in a forest, dappled sunlight filtering in, and had the feeling of being dwarfed by a giant, towering tree? For me…Help our forests