In Pursuit of Climate Hope

In Pursuit of Climate Hope
Or, Why We Launched a Climate Pledge

Here in the East Kootenay, as in much of British Columbia and the Northwest of the continent, the past month has seen us deploying every imaginable stratagem in order to escape the extreme conditions we’ve been confronted with — we’ve desperately sought out every square inch of shade for a reprieve from 40°C plus temperatures, cowered in any available shelter from sudden and violent hailstorms, and huddled indoors — when we’d so much rather be hiking the Purcells or swimming Lake Windermere — to avoid inhaling smoke from the wildfires raging around us.

Knowing that this is, in all likelihood, only the beginning — and that there is more and worse yet to come — it’s difficult to feel much of anything but anxiety, despair and, to be blunt, fear. The apocalyptic climate future predicted by so many, and that we ourselves have long warned of to any who would bend a willing ear, seems now to be the apocalyptic climate present. In author and journalist Rebecca Solnit’s latest piece for The Guardian, she writes that this summer:

In Canada the previous highest temperature was broken by eight degrees Fahrenheit, a big lurch into the dangerous new conditions human beings have made, and then most of the town in which that record was set burned down… A marine biologist at the University of British Columbia reported that the heat wave may have killed more than a billion seashore animals living on the coast of the Pacific Northwest. Lightning strikes in BC, generated by the heat, soared to unprecedented levels – inciting, by one account, 136 forest fires. The heat wave cooked fruit on the trees.

Fear would be a natural response to any one of these as isolated incidents — all at once, and collectively, it can feel like the only possible response. In a recent piece for the Nelson Star, written in reaction to the Kootenay heatwave, local scientist Mel Reasoner admitted that “No matter what actions governments and industry take to reduce emissions [now], we are in for a rough ride in the short term.” Greg Utzig, another scientist based in the Nelson-area, concurred. “Things will get worse over the next 30 or 40 years no matter what we do. Carbon dioxide stays in the atmosphere for a few decades. What we put in today will affect the climate in the coming decades. And what we put in the past is what’s getting us today.”

Unfortunately, however natural a response it is to the paradigmatic shift unfolding before our somehow-still-disbelieving eyes, fear can also be incredibly paralyzing. Fear is like a winnowing of your field of vision, as you spiral down the rabbit hole of “What if?” What if the worst comes to pass? What if my children and grandchildren face an uninhabitable future? What if species, like the caribou and the mountain goats that we have fought so hard to protect, are extirpated or go extinct? Animal refugees, or casualties, of a climate crisis they played no part in creating. What if?

At a time when we need most to be widening our field of vision, to be imagining and implementing a way through and out of this anthropogenically-induced nightmare, fear is a diminishing force. It’s like an emotional straitjacket — holding you in its grip, squeezing, and refusing to give. The harder you resist, the more it fights back. Hope, on the other hand, can be something of a remedy — an expansive force that stirs you back to movement, energy, life. Give it another go, keep trying.

Which brings us, finally, to the Climate Pledge — our hope-filled attempt to reaffirm and encourage the modest, but meaningful actions that we can take as individuals, and as communities, to make a dent in the three largest sources of emissions in our region — transportation, building and waste. It’s a place-specific commitment to steward a future for the land, forests, lakes, rivers, animals and people that we hold so dear — and to not give in to that all-consuming fear that can only serve to rehearse a tragedy that has yet to be, at least completely, fulfilled.

In the face of the megalith that is climate change, we’re not suggesting that a positive, can-do attitude and a local pledge will be sufficient to the planetary task at hand — and when we surveyed our membership about what the most influential lever for climate action was, and what they therefore wanted to see the Climate Pledge address, the resounding answer was policy change (91% of respondents, if you’re curious). The Climate Pledge isn’t meant to elide that, or to excuse our elected officials from their responsibility to act.

In fact, we hope our elected officials sit-up and take notice, and remember that each decision they make — whether it’s approving a housing development, deciding on infrastructure investments or setting strategic priorities for the years to come — has consequences for the climate. In this sense, the Climate Pledge is both an entry point for action for those who have been reluctant, or uncertain as to how, to dip their toes into tackling our generation’s greatest challenge and a reminder to those who have been given the power to enact systemic change, that they have a democratic and moral obligation to do so — and that the time for them to follow through is rapidly ticking away.

At a recent presentation to the District of Invermere on the need for immediate, effective climate action from local government, a Wildsight Invermere Board Member noted that while her own personal efforts were by no means perfect, they were “heartfelt, sincere and urgent.” The Climate Pledge is much the same — it is a far cry from a panacea, but it is a heartfelt, sincere and urgent rallying cry to those who want to subscribe to hope and not to fear, however insurmountable the odds appear. 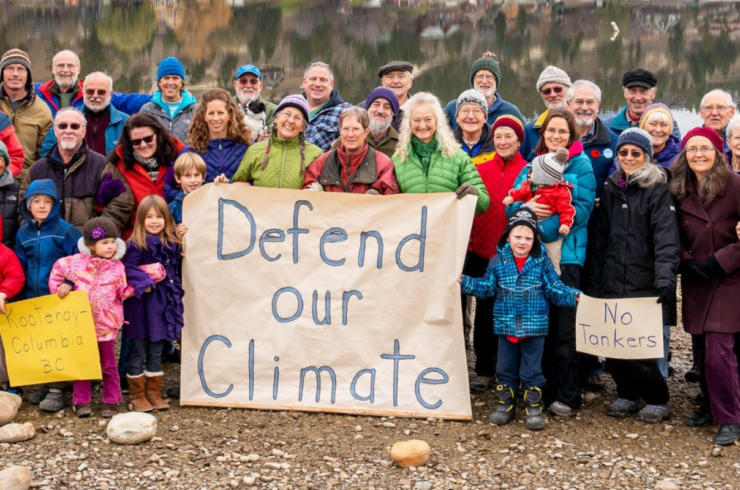 The Climate Pledge I pledge: To treat the Earth as a living, breathing system of which I am a part of, and which I am…Take the pledge