Wildfires destroy forests, threaten communities, and harm wildlife. They can grow out of control and cost millions of dollars to stop. So the general policy in B.C. has been to suppress any and all wildfires from starting or spreading.

These good intentions, however, have led to unexpected consequences for our forest ecosystems.

Before modern fire suppression tactics became commonplace, quick-sweeping wildfires would periodically whip through forests and open up the landscape, allowing fire-resistant trees to grow tall and strong. And animals would have space below their boughs to easily move towards food sources, or away from predators.

“We have engaged in a systematic program to suppress natural fire in these ecosystems,” says Jake Roos, owner of Nelson based company Loki Tree and Forest Service. “Our hillsides no longer receive the regenerative low intensity burns they did before settlement of these areas.”

As a result, many B.C. forests today are dense, filled with smaller trees and brush that can increase fire intensity. Ladder fuel (live or dead low-growing vegetation such as branches and shrubs) can carry flames to taller vegetation, causing more destruction. Research on the mountain pine beetle also points to wildfire suppression as a primary cause of the beetle’s destructive spread.

Other pressures are also exasperating wildfire risks, explains Roos, including climate change and increased industrial and recreational activity by a rapidly growing population.

Policies around wildfires, and wildfire management, are starting to shift due to a growing body of research that suggests low intensity wildfires actually lead to positive changes for the forest. A 40-year experiment in Yosemite National Park found that managing wildfires with minimal suppression creates landscapes more resistant to catastrophic fire, with more diverse vegetation, increased water storage, and a healthier forest structure. Closer to home, Natural Resources Canada now highlights the benefits of allowing forests to burn, weighing ecological benefits with the potential damage and costs when setting forest fire policies.

But how do you encourage a healthy forest when it’s close to communities, or valuable assets? Forests near urban centres and critical infrastructure have not been allowed to go through natural cycles of periodic low intensity wildfires. You can’t simply let a wildfire rip through and threaten resources such as town water sources or people’s homes.

“One solution is to develop a dedicated labour source that can work on behalf of communities, and work on the problem effectively,” proposes John Cathro, a West Kootenay forester and one of the founding partners in a new program piloted by Wildsight.

In the fall of 2020, we launched the Youth Climate Corps (YCC). The inaugural program crew led restorative work in several areas to bring back a more natural forest in pockets of the West Kootenay.

Disrupting the spread of future wildfires means getting rid of forest fuels accumulated over the decades of misguided fire suppression. Using chainsaws and pruners, crew members removed branches, debris and smaller trees that could feed a forest fire with the flick of a match in tinder-dry summers. They then burned the debris in small controlled fires.

“We cut down little trees that were not as fire-resilient, or too close to more fire-resilient trees. Then we’d drag those to the fires and burn them,” describes YCC member Summer Monkman.
Monkman said that while the work could sometimes be grueling, the team’s positive work atmosphere made it fun. And she learned a lot along the way.

“Before, I couldn’t really identify a tree, like this pine from that pine. I’m pretty well versed in that now,” she comments.

It was not easy work. As a professional forester, Cathro says he was impressed with the YCC’s work, their attitudes, and their commitment to the job.

“Some of the days they had to work it was cold, it was wet. They didn’t really know what they were getting into. But they just kept showing up and laughing,” Cathro describes.

The flagship wildfire mitigation project for the inaugural YCC team was in West Arm Provincial Park near Nelson. In the 1990’s, this area was slated for logging, but locals protested and eventually the government relented and turned it into a park, Cathro explains. West Arm includes Five Mile Creek, which provides 80 per cent of Nelson’s domestic water, making it a critical piece of land for residents. In previous ages, West Arm’s forest would have seen a low-intensity natural fire roughly every 30 to 100 years. But like other forests across B.C., wildfires have been suppressed adjacent to the communities on the edges of this park.

Cathro says West Arm Park did see some forest fuel treatment a number of years ago, but there was pushback from residents about what was perceived as clearcutting the forest. The work was stopped and the forest continued to grow unabated. YCC’s work, on the other hand, had buy-in and financial backing from local residents, elected officials, and government partners like BC Parks and BC Wildfire

Six weeks of training and labour by the YCC crew resulted in four hectares of crucially located fire-resistant land within the park. The particular parcel YCC treated creates a fuel break that covers Nelson’s buried water pipeline and the road used to access the city’s water intake infrastructure. It also protects ecological values in the park on either side of the treatment area.

“We’ve thinned that forest, taken out the species that are unhealthy, and retained fire resistant species,” Cathro describes.

YCC crews also undertook similar, smaller-scale projects in the tiny hamlets of Argenta and Johnsons Landing at the north end of Kootenay Lake. Team members completed projects near the community halls, which operate as not only gathering spaces, but also emergency evacuation and operation centres and storage for the villages’ modest firefighting equipment. These projects parcels tested a blueprint for future projects. Across the Columbia Basin there are dozens of other similarly-sized communities at great risk of wildfire damage due to their small size, distance from larger urban resources like fire departments, and proximity to wilderness areas.

Local forestry company Loki Tree and Forest Service was a key partner in YCC’s wildfire work, providing the infrastructure and training required to safely mobilize and orient the fresh-faced crew. Roos says that, as an operational forest contractor, he sees the benefits of programs like Youth Climate Corps for not just wildfire risk reduction, but other outcomes too.

“If we wish to conduct these projects as cheaply as possible and use only wildfire hazard reduction as our narrow goal, then there are many other ways to do this work that meet that standard,” says Roos. “However, if an agency with a mandate for more than just wildfire reduction (ie. our provincial government) wishes to derive greater value from these projects, there is opportunity for an educational component, community stimulus, meaningful employment, and a greater understanding and attachment to the landscape for local young people.”

For Cathro, those larger goals were why he helped bring the YCC program (which includes wildfire mitigation, food security projects, and other kinds of climate-based initiatives) to life. The Youth Climate Corps is a way to provide meaningful employment and training opportunities for youth, to complete tangible climate mitigation projects, to educate communities, and to empower youth to make the bigger changes needed for our planet.

“The Youth Climate Corps isn’t just teaching youth how to save seeds or understand wildfire ecology or how composting works,” says Cathro. “The question isn’t ‘how do we as older adults manufacture opportunities for youth?’ At its core, the question is ‘how do we empower youth to be meaningfully involved in resolving the climate crisis’?” 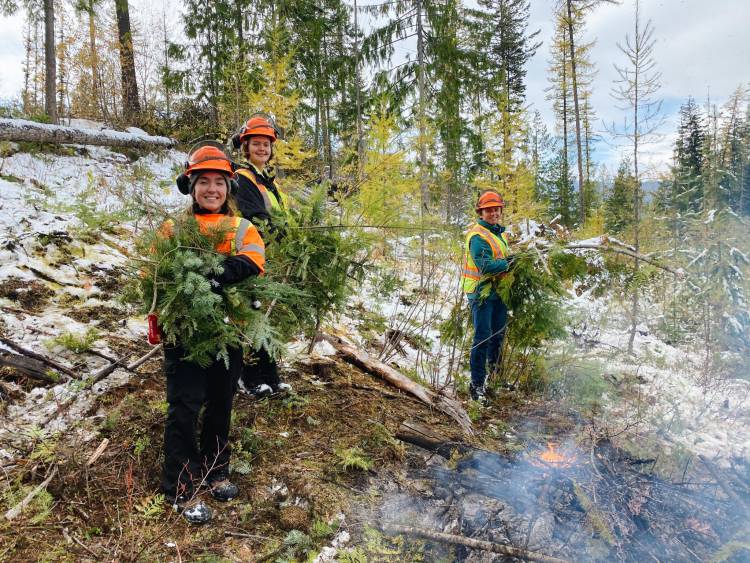