Wolverines need to room to roam: The importance of connected wild places

Canada’s Southern Rocky and Purcell Mountains are a vital part of North America’s most intact and important wildlife corridors. The mountain ranges form crucial migratory bird habitat, and are critical habitat for grizzly bears, wolverines, badgers and a host of other wildlife.

Wildlife corridors are so important because wildlife need room to roam.

When their pathways are fragmented and separated by roads, cities and towns, logging, or other barriers, it isolates animals into island populations, reducing their ability to find mates, reducing their gene pool and bringing them one step closer to extinction. They need connected landscapes to access food, water, shelter and escape predators. Ensuring that wildlife have connected wild places sustains their populations, and supports overall biodiversity—the variety of plants and animals present on the landscape. In light of the global biodiversity crisis—with an estimated one million species of plants and animals at risk of extinction—maintaining wildlife corridors is more important now, than ever before.

To learn more about the importance of wildlife corridors, we sat down with Tony Clevenger, a wildlife research scientist based in Canmore, Alberta. His research on the fierce wolverine—who were once found across much of Southern Canada, but now are only found in the Arctic region and in parts of South Western Canada—highlights the importance of keeping wild places intact for this special creature.

Wildsight supports Tony’s research on wolverines through the generous funding from the Fish and Wildlife Compensation Program, the Wilburforce Foundation and the Liz Claiborne Art Ortenberg Foundation.

Wildsight: What makes wolverines so fascinating? 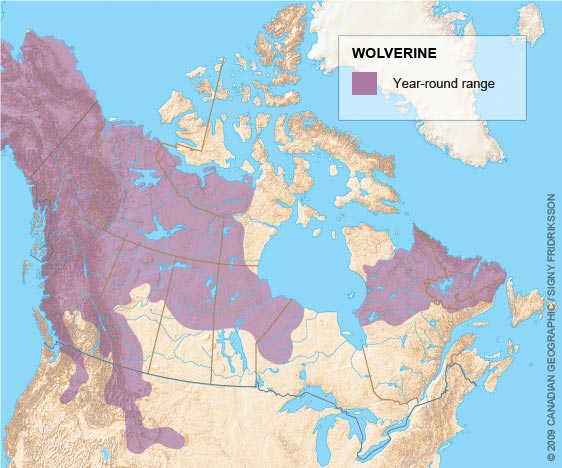 Tony Clevenger: People love grizzly bears and wolves, the iconic charismatic megafauna. But when you talk to people about wolverines, their eyes become wide, they become animated, they open up and become intimate. They tell you wolverines are their favourite animal, their dream is to see one; or they tell you their story of catching a glimpse of one. I think it’s the wolverine mystique. We are all fascinated by where they live, how they live, how they survive, and their rare and secretive, almost ghost-like nature. And the often-told story (likely true) of a wolverine taking on grizzly bears single-handed or taking down a moose all by itself. They command respect. How they live through winters in high country with little to feed on is truly an amazing animal feat.

WS: Wolverines are referred to as an “indicator species,” meaning that their health represents the general health of wild ecosystems. What makes wolverines so important?

TC: Their importance on the landscape has been overlooked for decades, mainly because they have been so difficult to study. In the West, much of what we have focused on is grizzly bear conservation and management, assuming if we have healthy grizzly populations the landscape will be equally healthy.

There’s little doubt that compared to grizzlies, wolverines are more sensitive to human disturbance, there are fewer on the landscape due to being a truly territorial species, and have a lower reproductive rate. You can fit four-five grizzly bears with overlapping home ranges in one male wolverine territory.

For these reasons, wolverines are an important bellwether of well-connected, productive and intact ecosystems. The further south you go in wolverine range the more precarious their subpopulations, and much of this is due to habitat alteration and disturbance, trapping, roads (paved and forest service roads), industrial resource extraction industries, and so forth.

WS: How are wolverine populations faring in the Purcell and the Rocky Mountains? What are their biggest threats?

TC: We’ve worked in the Rockies between 2010-2016. In the protected areas—National Parks and Provincial Parks—wolverines appear to be doing relatively well, such as in the mountain national park complex (Banff, Yoho, Kootenay, Jasper). As you move south into the Crowsnest/Flathead area the population thins out to a point that connectivity with the Northern US Rockies population (this is one of three remaining linkages between western Canada/US) is hanging by a thread. Our findings were very similar to what Doris Hausleitner and Andrea Kortello found in the Columbia Mountains: protected areas are critical and the further south one travels, the lower the likelihood of finding any wolverines, along with Highway 3 forming a major barrier to movement, limiting mating and gene flow between populations.

WS: Why is connectivity so important for wolverines specifically? What’s the furthest you’ve seen a wolverine travel in one day?

TC: Connectivity is important for maintaining the large meta-population that they live in. I discussed their low density situation due to being truly territorial, only a certain number can live on the landscape due to this exclusive nature of their ecology. Movement of breeding females and young dispersers, and their subsequent survival and successfully reproduction is critical for maintaining the meta-population. If habitat and range is fragmented, this disrupts connectivity including gene flow. Sub-pops become even further subdivided and reduced in number, leading to greater likelihood of local extinction occurring. This is what’s happening in the southern extent of their range where habitat is more fragmented and human disturbance higher than northern parts. Regarding the most travel in one day by a wolverine? We didn’t capture and radio mark individuals, but relied on noninvasive genetic sampling and camera traps.

Radiomarked wolverines have shown they can travel easily 30-40 km in one day, in mountainous terrain. Nothing gets in their way.

WS: How is connectivity for wolverines threatened in the Purcells Mountains and to the south into the US? Why is this an important area for wolverines?

TC: This is a critical area because once populations get pinched and fragmented they can easily become isolated and that leads to local extinctions, and in the case of wolverines in the southern extent of their range (i.e. southern Purcells and Canadian Rockies) this could result in a significant reduction in their range. This is further exacerbated by the fact that wolverine range in the US is more fragmented and subdivided (partly because of fragmented nature of the mountain systems there, habitat and changing climate) which makes dispersal between core or sanctuary areas the more difficult and unlikely. The Canadian Crown of the Continent is the most important area for wolverine conservation at a transboundary international scale; far more important than the national park complex because of the low population density, human disturbance/activity, and lack of stable breeding populations that form sanctuary areas.

The threats to wolverine connectivity include: habitat loss and alteration from industry (oil and gas) and forest cutting practices; road impacts on their movements and to a lesser degree road-kill (highways, like Hwy 3, can be barriers to movement and we know that the Trans Canada Highway is a strong barrier for breeding female wolverines); motorized recreation on Forest Service Roads created by forest cutting practices, which can displace wolverines from critical habitats, especially breeding females; trapping, which results in loss of individuals in the already small population, and if breeding females are removed then this can have jeopardize long-term population viability.

WS: What can we do to protect wolverines in the Purcells?

TC: Manage habitat and human activity (all listed above) in ways that will provide more secure habitat for breeding females and much needed connectivity within and between subpopulations. As we’ve seen for grizzly bear management the last three decades, this doesn’t happen overnight but requires identification of management needs and actions required to ensure that wolverines can reproduce, survive and thrive in the human-dominated Canadian Crown.

TC: Wolverines are amazing animals. They are not keystone species that entire ecosystems depend upon; we know that ecosystems can function and be viable without scavengers like wolverines. However, in an age where habitats and landscapes are increasingly becoming fragmented and disconnected, and measures are being taken internationally to restore and secure large landscape scale connectivity, wolverines are the ideal canary in the coal mine to let us know how well we are doing and where we need to focus land and human management actions to keep our landscapes integral and connected.