Last August, 16 pioneering teenagers spent two weeks traveling down the Columbia in the first run of Wildsight’s new education program – the Columbia River Field School (CRFS). As they paddled stretches of the river between the headwaters in Canal Flats and the Kootenay confluence in Castlegar, they met with over 20 guest speakers including indigenous leaders, local and provincial government officials, scientists, conservationists, writers, artists, adventurers, and other lifelong residents. Upon completing their journey, many students felt that they had gained a rich and wide-ranging understanding of the river’s story.

As local ecologist and CRFS guest speaker Greg Utzig counseled them at the ‘Future of the River Symposium’ held at Selkirk College on the last day of the trip, “Take the knowledge you’ve gained from this and spread it – even if its just to people you meet on the street – because you are already way more informed than almost anyone else in the Basin.”

Now, almost a year later, the 2018 alumni are doing just that.

With speaking engagements booked in venues ranging from local classrooms to international conferences such as the One River, Ethics Matter Conference this May 2019 and the International Columbia River Transboundary Conference in September 2019, it’s clear that the value of their perspective is being recognized throughout the Basin. The Province of British Columbia has also sought alumni to serve as youth representatives on the Columbia Basin Regional Advisory Committee, which provides public input on hydroelectric dam operations and the Columbia River Treaty.

Members of the class of 2018 are seizing these remarkable opportunities with both enthusiasm and creativity. Notably, Selkirk Secondary student Gretchen Miller of Kimberley recently completed a set of poems, which shine light on both dramatic and tranquil moments from last year’s journey. We are honored to share them below with ‘author’s notes’ attached to provide context for the reader.

Basin youth who will be 15-18 years old on August 15, 2019, can apply to participate in this year’s program until May 15, 2019. The Field School is a multidisciplinary Board/Authority Approved Course (BAA); students from any school district in the Columbia Basin may earn four high school credits upon successful completion, through School District 8 (Kootenay Lake). For more information and to apply, head here wildsight.ca/crfs. 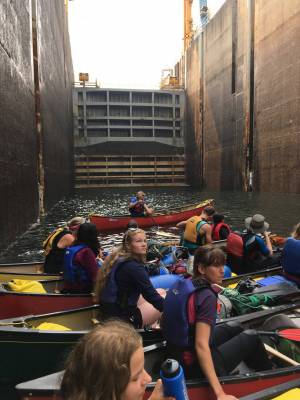 Aliens.
That’s what it sounded like
the metal wall sealing shut.
Our heads whipped to watch the water level sink

lower
lower;
down we went.

Chirps of
is that really where we started?
chorused like hungry-seagull calls.

Minutes passed.
We seemed to be cursed with unfaltering grins.

The title to this poem says it all; this one is about travelling through the lock of the Hugh Keenleyside dam. It was one of our last days of the CRFS and our last big paddling day. We had talked about going through the lock on our long days of driving and were a mix of nervous and excited. I myself was worried about getting sea-sick as I had a couple times already, but mostly, we were so excited we didn’t even know what to think. Before we knew it, Grace (one of our leaders) was buzzing in to say we’d arrived, and we floated into the lock. The sounds of the huge metal doors closing and the water being drained were mesmerizing. They sounded like movie sound effects. It was crazy that one, none of us got motion sick (I think!), and two, we sunk so far down without hardly realizing it. Even though, in text, not a lot seemed to happen, it was such a lovely experience. We waved goodbye to the man running it all up in a room just above where we had started, then carried on on our journey. 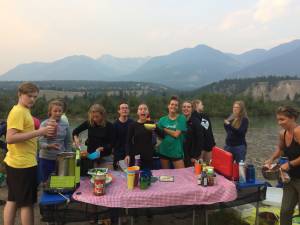 Never before had dance parties
been such an essential part of dishwashing.
A moth’s final dive for warmth.
He wore his headlamp on the back of his head
We couldn’t help but grin.
He brewed everyone caffeinated, mint tea
lengthening our work
and visit.

Ella beatboxed to Mambo #5
as we strutted,
pouring residue down the grey-water bin.

This poem is about the sort of “behind-the-scenes” of the Columbia River Field School (CRFS). Every day we signed up for chores like lunch making, water sanitizing, and dishwashing to keep things running smoothly. Except, there were a couple days where our discussions ran late or something else happened and our dishes from supper were left unwashed until after dark. This poem is about the first of those two or three late(ish) nights.

Another thing that was a regular occurance on this trip was waking up quite early. So, as one can imagine, by the time it was dark we were all in a kind of over-tired, hyper state. Everything seemed funny. Some of my best memories are from these moments because these were the times where I connected with some of the leaders and a lot of the other girls attending CRFS. We sang in hushed tones and danced to Ella beatboxing the riff at the start of Mambo #5. Graeme (one of our leaders) showed us how to “properly” wear a headlamp and made tea. A moth landed in my tea, but after spending over a week camping, I wasn’t too fazed. Then of course we realized drinking tea just dirtied more dishes, so the job carried on. Some of us girls made up dances to country music while brushing our teeth. The list of crazy things goes on. Going into CRFS I never imagined I’d make so many friends, or that I would feel open enough to just be my quirky self like I was in these moments. 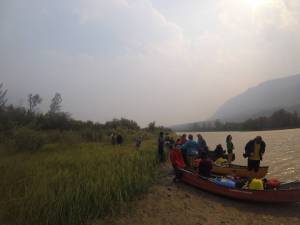 Under a watercolor-painted sky
the ground squeaked
like mice
hiding in our shoes.
Purple laughter circled.
We poured warm
laundry water on our toes
the blue of my shoes finally visible.

Washing gunk off sticks
while numbing our bodies in a river
was a productive hobby.

The buzz of wasps rang in our ears.
We hastily set up camp.
The crawling itch of venom
reminded us of our situation.

Roughing the wet trenches
was our only way to stay dry.
Sedges tickled
and snared our feet.

We inhaled quesadillas
dreaming of Larry’s
and the showers in Golden
where we’d end up washing our clothes.
We didn’t realize washing
would only would make them dirtier.

We rose to the sweet
stench of forest fire smoke.
“What in the wetlands?”
Every word bounces in a Kiwi accent.
They danced
feet kicking faster than
hummingbird wings.
“Red socks make me fast.”
We clapped as they glided
along the quicksand shore.

As cheesy as hashtags can be, this one was totally intentional. It was a slogan we made for ourselves after the best-worst detour we had to take on our trip. That detour was to a place we renamed Mud City for obvious reasons.

It was within the first couple days of being on the river (after our training on Premier Lake) when we encountered a thunderstorm. We quickly pulled off the river in case of lightning storm. The storm didn’t let up for a while, so instead of finishing the three to four kilometers we had left of our paddle, we sent up camp for the night. The ground there was super mushy and basically a slab of mud and seges in the middle of the river. The ground was quite uneven too.

Let me paint a mental picture of the layout of our camp: First, there was a muddy strip of “sand” lining a portion of the river which was where we initially pulled ashore. From there, we walked through waist-high seges and little trees to store our canoes and to get to our “kitchen” and tent areas. To get to all these places we also had to walk through a wet trench in the ground that surrounded us. We set up our kitchen on a flat, relatively-clear piece of land which was just muck by the end. From there, we walked slightly uphill, through a little gateway of trees and bushes to where we set up our tents. We couldn’t go too far from there either without hitting the same watery trench. Naturally, by the end of this we were soaked and plastered with mud. Thank goodness for rain pants!

Oh, and wait, there’s more! When setting up tents we stumbled upon wasps nests and a lot of mosquitoes. I had over 30 bites between my two feet alone. We had to postpone supper because of the wind and were super hungry. There weren’t many places to sit either that were free of mud. I could go on forever about all the unexpected things that happened.

BUT, I could also go on forever about all the amazing things that came out of that day. We danced, played card games, and told funny stories to make the best of our situation. The mud made squeaky noises when we walked which made us giggle. We also ate chocolate which was a definite highlight!

Even though it was difficult–and our clothes were never quite clean again–I don’t think any of us regrets staying for the night. It put any other unfortunate thing on the trip, or in our lives in general, in perspective. I started a multi page long list of things we were grateful for on the trip starting on this day.

*Note: There are probably a few things that don’t make sense to the average person in this poem which I will explain.

1.     “Snakker om sola, så skinner den” is a Norwegian phrase that means “speak of the sun and it will shine.” It’s the equivalent of “speak of the devil,” but I like it a bit better. It seems more positive.

2.     The word “absquatulated” means to leave abruptly, so in our case, leaving “Mud City” in a hurry to make up for lost time the day before.