For most of us, groundwater isn’t something we give much thought to. Even for those who have wells, we don’t think much about aquifer levels unless our well runs dry.

But for Wildsight’s Nicole Fulcher, our region isn’t a network of towns and highways, or a series of mountain ranges and valleys, it’s a set of aquifers that she wants to tap into. Nicole is Wildsight’s Groundwater Monitoring Coordinator and her goal this year is to establish monitoring wells to keep tabs on groundwater levels in twelve priority aquifers around the Columbia Basin.

What Nicole is looking for isn’t always easy to find: an unused well, far enough from other wells that measurements won’t be affected, with a cooperative landowner. Since the project started last year, she’s found wells in six of the twelve aquifers, with one well in Blewett, just outside Nelson, now set-up with automatic monitoring equipment. Wells are still being sought for Wardner, Creston (near the Goat River), Golden (in or north of town), Castlegar (Selkirk College area), the southern Slocan and Lower 6 Mile.

“The goal isn’t just to collect the groundwater data,” said Nicole, “but also to get people thinking about their local aquifers and how they might need to be managed in the future.”

This basin-wide project grew out of a three-well groundwater monitoring project that has been operating near Invermere since 2013. The pilot was a collaboration between Living Lakes Canada, Ecology Action Centre’s Groundswell Program in Nova Scotia, and the Lake Windermere Ambassadors. 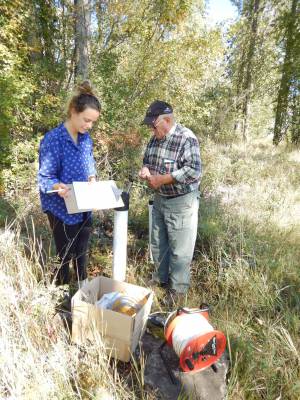 Nicole hails from Trail, has nine years experience consulting in the water field, and is currently working on her MSc. in the field.

“I’m particularly interested in climate issues,” added Nicole, “and I’m sure the data we collect over the coming years will become part of the discussion as we manage our water supplies in a changing climate.”
All of the groundwater data collected through the project will soon be available to the public online and will be shared with the province as well. If you know of an unused well that might be useful for the project, get in touch with Nicole (nicole@wildsight.ca, 250 818 9108).

Wildsight gratefully acknowledges the contributions of the Columbia Basin Trust, Lush Cosmetics, and the McLean Foundation to this project.