Posted on October 6, 2016 by Eddie Petryshen

Site 1: Every Stand Tells A Story

It’s a normal day in the field. The overnight dew has soaked our clothing. An early morning creek crossing has brought a chilling numbness to my feet. The mosquitoes are out in full glory and they’re showing the type of annoying curiosity that only mosquitoes can show. And yet, there’s no place I’d rather be.

We’re deep in the Flathead Valley checking out potential future cut blocks. History surrounds us. At roughly 300 years, old larch stumps tell the story of the area. These trees were cut in the 60s. Their thick withered and scaly bark has felt the heat of catastrophic fires and the cold of desolate Canadian winters. Their tree rings show the area’s fire history: millimeter-wide cracks in the tree rings tell us that massive fires have burned through this valley and these old resilient larches survived. One of those fires burned through in the 1930s, taking nearly everything in the Flathead Valley, catalyzing change and revitalization within the ecosystem.

The spacing and size of these old Larch stumps tell us that this now dense, even-aged Lodgepole Pine stand was once an open forest dominated by large and well-spaced Larch and Fir. Lodgepole Pine is a very adaptive species and it’s usually the first tree species to invade a site after a forest fire. These thick and dense Lodgepole Pine forests aren’t the most valuable for wildlife as they’re not the preferred forest type for most large mammals to live in. 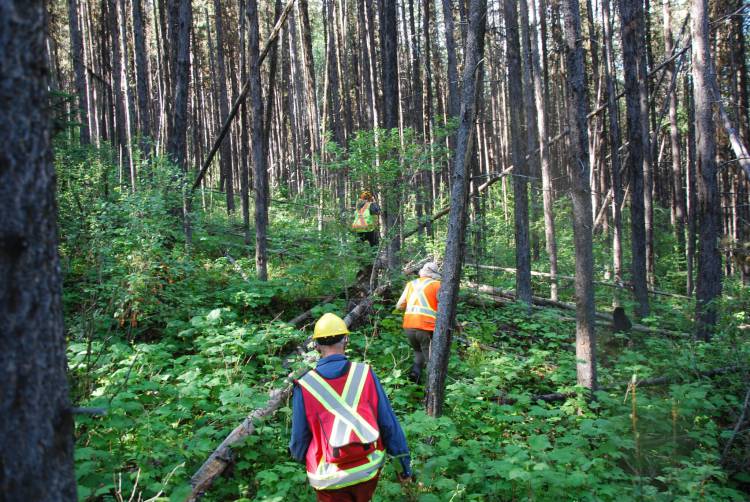 There are eight people in our group. It’s a mashup of conservationists, forest scientists and layout workers from the forest company that proposed the blocks. In comparison to these people, I’m an absolute rookie who is lucky enough to soak up the combined experience and brilliance of the people around me.

We cross a small stream. The stream will need a 20-30 meter buffer from the logging surrounding it. This is done to prevent increased sediment loads and ensure the stream will function normally post logging.

The proposed block appears to be pretty straightforward. There are no major streams within the block and the area doesn’t appear to have heavy wildlife usage—there aren’t any well-defined game trails or licks or wallows. Given these factors, it wouldn’t be the worst area to log.

It’s now later in the day and the sun is beating down on us as we hike up a steep forested ridge. The jagged rocks of the Border Ranges lie in the distance. The mosquitoes are still out in full force and they’re showing serious affection to my neck and forehead. This is the site of the next proposed cutblock. The forest here is interesting. As we climb in elevation, the flora changes drastically, from an unusual mix of Larch and Spruce to a Fir and Spruce dominated type. The trees are mostly large diameter and provide important habitat for a wide variety of species. We pass plenty of well-defined animal trails and lots of animal scat.

The gradient of this slope will require cable or unconventional harvesting. This unconventional form of harvesting uses a yarder, an enormous and powerful machine with a long cable system strung down a hillside. The cut logs are strung up to the yarder’s grapple and carried down a hillside or mountain for hundreds of metres. The problem with this method is that it doesn’t allow for selective harvesting and usually results in massive clearcuts on steep ground. In the East Kootenay, cable or unconventional harvesting activity will increase in the coming years. The forest industry is being forced onto steeper ground because much of the easier or lower elevation wood has already been harvested.

Disagreement falls amongst the group. We all know some form of logging will take place here, but the intensiveness of that logging is where the disagreement lies. There is much silence between statements when all that is heard is the creaking of a soon to be wind-felled, dead pine tree. I realize I’m sitting in the tree’s fall trajectory—I move.

We agree that the least damaging way to log this piece of forest would be to leave 20 stems per hectare of the largest Fir, Spruce, or Larch. These 20 stems would be left alongside the non-merchantable trees, which are mostly young smaller trees. This type of management would allow the growth of an uneven aged stand with very distinct age classes and size classes.

We reach the ridge top of the mountain. As we walk through mossy open forest we notice a large set of moose antler sheds. These sheds confirm what we already know—this forest is very significant for wildlife.

From an opening on the ridge, we look West into the main part of the Flathead Valley. The sun is glistening over this meandering gravel bed river, the lifeline of the area. Its floodplains are used by the birds and North American carnivore species, such as wolves and grizzly bears, use this river system for food, habitat, and movement corridors. To me, the importance of this river is obvious. In 2010, a UN report stated that the Flathead is an area of “global ecological significance.” As I stand in this future logging block all of these factors come into my head. It makes me realize how important these decisions are. It makes me realize that this logging company has to do a good job.

The company has agreed to implement the group’s recommendations. They will leave 20 stems per hectare of the largest Spruce, Larch, or Fir alongside the non-merchantable small trees (understory) to eventually create an uneven aged stand. The large trees left will provide important habitat and forest cover for birds, grizzly bears, and ungulates. 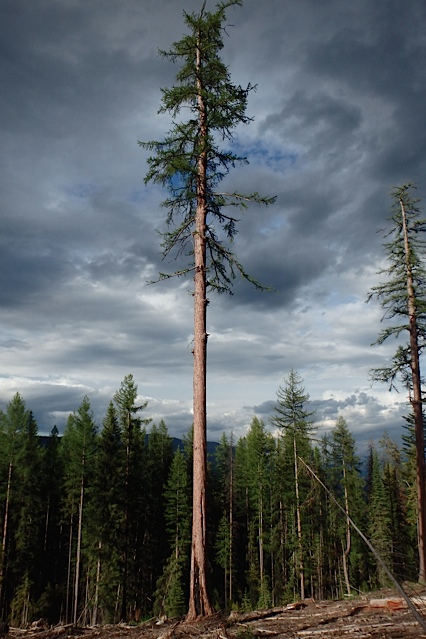 It’s a muggy 29 degrees Celsius and I’m sweating buckets under the summer sun. Today, we’re in the South Country (about 20km West of Koocanusa). This area is notorious for massive veteran Larch trees that stand out above the rest of the forest canopy like a city skyline. I’m joined by two Canfor employees and we’re doing a postharvest evaluation of a large block that overlaps with Canfor’s High Conservation Value Forest (HCVF). As part of Canfor’s Forest Stewardship Council (FSC) certification in the East Kootenay, the company has identified areas of high wildlife or cultural value. When cutblocks overlap with HCVF, there is a stringent set of protocols based upon what the management objectives for a given area are. For example, if an area has a high population of grizzly bears, Canfor will mitigate their impact on that population by making sure they don’t damage berry crops and by leaving large tree patches that promote connectivity.

The logging here is really good. Large Western Larch snags (high value snags) have been left to provide essential habitat for various bird species. In a wildlife tree patch, we find the active stick nest of a large raptor in a veteran Larch tree. Wildlife tree patches are patches of leave trees within a logging block. They provide better habitat than individual scattered trees.

Coarse Woody Debris (CWD) litters the ground throughout the block. Although it may not be prettiest sight to the untrained eye, these large pieces of logs, fallen timber, or stumps are critical to both small critters and large mammals. Black bears and grizzlies dig under the logs to find insects and use stumps and logs for dens during the winter months. The logging here has also taken into account ungulates who use this area for shelter and food during the winter months. Large clumps of Fir and Larch trees have been left to provide shelter, food, and snow interception for deer, elk, and moose.

As we drive along the dusty Caven Forest Service Road the towering Larches of the South Country fade from the rear view mirror.

The East Kootenay region is a phenomenal place. Our region has fully intact and undeveloped drainages. We have towering old growth Western Larch stands that provide habitat for endangered birds. We have rare and diverse plant communities and eco-types. We have pristine and spectacular streams, rivers, and lakes. We have stable and healthy grizzly bear populations in certain areas. We have wilderness.

Having these invaluable resources doesn’t mean that we can’t have a thriving forest sector. It only means that our forest sector has to mitigate impacts on wildlife, log for the purposes of ecosystem restoration, and manage the land for sensitive or vulnerable species. My “field days” make me realize that our region’s forest industry could be sustainable. However, in order for that to happen the region’s annual allowable cut needs to lowered to long term sustainable levels that both our mills and our ecosystems can handle. Remaining intact and untouched drainages have to be left wild. These areas are critically important for the future of wildlife, biodiversity, and wilderness in our region. There are huge challenges to a sustainable forest industry, but it’s possible. It will just continue to take a lot more work, cooperation, and progressive thinking governments, companies and individuals.