Caribou In Our Midst: A Visit to Revelstoke Rearing in the Wild

Posted on Monday, May 2, 2016 By Lindsay Cuff
Posted in:  Mountain Caribou, Conservation 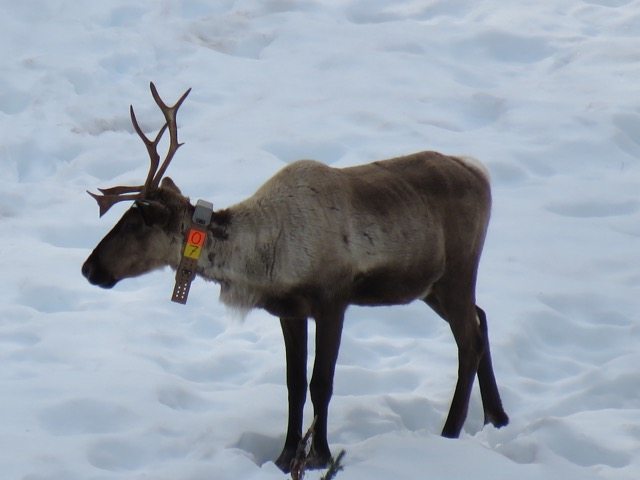 I recently had a rare opportunity to visit the Mountain Caribou maternity pen outside Revelstoke. I was part of a small group of participants from the Columbia Mountain Institute Predator-Prey Conference privileged to visit the project. The maternity pen is a project of Revelstoke Rearing in the Wild. The group includes a cross-section of environmental, snowmobile, forestry and community groups with funding coordinated by the City of Revelstoke. Access to the pens is limited to personnel necessary for the operation, with very limited viewing by others in order to minimize disturbance of the animals.

I admit to concerns about the amount of stress on the animals being penned and the less than encouraging results from the first year’s operation—as calf survival rates merely mirrored those of wild reared calves. However, the calf survival rate from last year’s operation was more than two times that of wild reared calves after 10 months (8 of 15 calves—over 50%—survived compared to an average of 20-25% in the wild). This has given me cautious optimism that this experiment may be providing a much needed tool for recovering caribou.

Mountain Caribou recovery has come under a lot of scrutiny as herd sizes continue to dwindle across most of the range. A history of logging, access and reservoir construction has severely impacted survival. It will take decades for forest recovery and reestablishment of the predator-prey relationship under which Mountain Caribou have evolved.

This year, 12 caribou have been captured and placed in the pen, 10 of whom are pregnant females. The pen has been expanded from six to eight hectares in size. The caribou receive supplemental feeding of lichen (collected by school kids and community members) and later pellets to increase their nutritional intake. 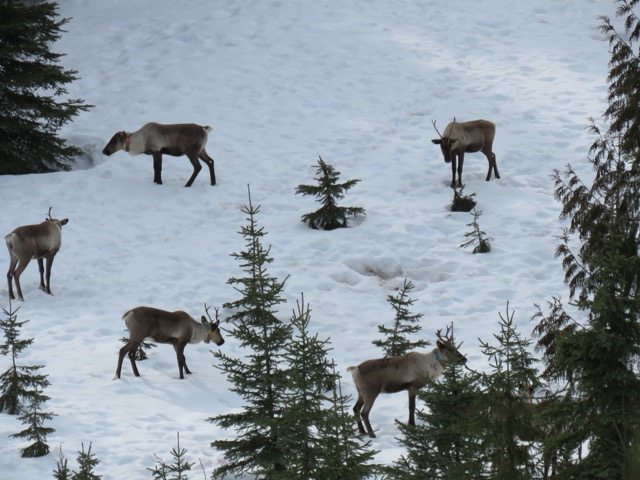 The day of our visit, my group bushwhacked up a hillside and quietly sat on a small ridge overlooking the enclosure, awaiting the appearance of caribou. After more than half an hour, just as some people were starting to look anxious about returning before the end of the day, caribou began to wander into the opening below us. And though these animals were in an enclosure, watching them in their natural habitat was totally enthralling. Ten of the the dozen animals eventually appeared, never aware of our presence.

In the next few weeks, hopefully they will have healthy calves at their sides. These calves will have the advantage of being predator-free for their critical first months. In July, they will walk out and join others in the herd, a group of whom are presently wintering on the mountain just above the enclosure.

It was an honour to visit this community-driven project taking positive action for recovery of mountain caribou, an animal that was once the primary ungulate species in the Kootenay-Columbia region.