Intimate With This Piece of Ground: The Extraordinary Life of Margie Jamieson

“When you come to a fork, keep taking the worst road,” she says over the phone, directing me to Muskrat Ranch, her off-grid 80-acre homestead on the fringe of the Purcell Mountains. “We can meet anytime but Monday through Wednesday, when I’m off with my team and wagon.”

“How about tomorrow?” I ask. 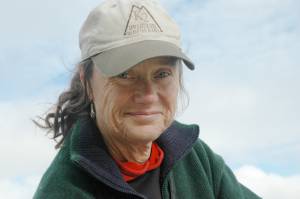 I anticipate her response to come tapping along a roll of telegraph paper, or through a Pony Express, a sweaty courier, dismounting his steed, and sprinting to my door. Instead, Margie emails me later that night: “See you at four.”

We sit around her kitchen table in the log cabin she built 35 years ago, originally intended as the barn. “Let this be a lesson,” she says. “Don’t get too comfortable or nothing else gets done.” She pours us a cider, and puts out a bowl of chips. Outside, her horses rub their manes against my motorbike. Perhaps she notices I look nervous. “You better move it into the shed,” she says. “They might knock it over.”

I am sitting with Margie Jamieson, one of Canada’s most remarkable mountain women, whose staggering accomplishments, in her 64 years, leave me feeling like I’ve spent life in my parents’ basement. In the mid ‘70’s Margie and her partner, Art Twomey, built Boulder Hut, one of Canada’s oldest running backcountry ski lodges. She is one of two female charter members of the Canadian Avalanche Association, and taught professional-level CAA industry avalanche courses. A stalwart environmental activist, Margie is a founding member of Wildsight, formerly the East Kootenay Environmental Society, and has roots in the early years of the Purcell Wilderness Conservancy, where she ​advocated for larger areas of conservation. And for 30 years, Margie operated Ptarmigan Tours, a global adventure tour company.

I am talking with a woman who has travelled a road few have taken, full of swashbuckling escapades, scattered with the occasional bump of debris, but nothing like the directions she gave me.

You Just Put It Out There. 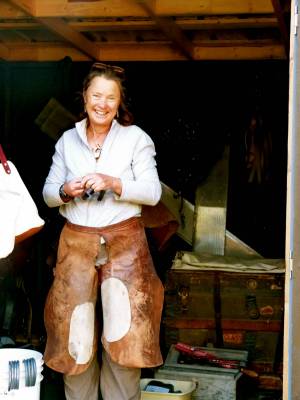 Margie is warm and kind, yet her eyes possess the strength of someone you would never want to mess with. A veteran environmental activist, and one of the first female backcountry ski guides, Margie has developed a no-bullshit approach to life. Long-time friend, Pat Morrow, arguably, one of the world’s most widely-travelled mountaineers found Margie, “a bit intimidating at first, as she was by far the best backcountry skier I had met, and she could play a mean game of 8-ball.” When Pat discusses Margie, he’s talking about an old, dear friend, “despite​ the fact that she listens to country and western music.”

While Margie recounts her life story, at moments she pauses, and looks towards the floor with all her memories. She shakes her head, smiles, sometimes wrestling a tear. Yet most often, she laughs while pondering this beautiful life, where, “You just put it out there. What you need comes to you.” When the late afternoon sun slips behind a cloud, she notices I’m struggling with taking notes, and offers to turn on the lights. “It’s free,” she says proudly. “We’re at 100 percent power,” referring to the charge on the solar panels towering beside her vegetable garden. “Not a cloud in the sky.”

I Never Remember Falling in Love With Mountains.

When Margie explains what influenced her choice to flee the city as a young woman, she credits her mom, who gave her the ability to think for herself. “At 16, it was unheard of for a girl to head into the mountains with boys,” she says. In high school, her mom would drop Margie off on the highway on the edge of Calgary, where she would hitchhike to Banff to sneak onto chairlifts.

“I never remember falling in love with mountains,” Margie recalls. “It just was, and always is. I can’t picture myself not being in the mountains.”

The day after Margie graduated from university, she moved to the mountains of Banff National Park, yet with the changing scene of kids moving out from the east to party, it didn’t take her long to find the quiet mountains of the East Kootenay. “The day I met the Purcells,” she says, “it was like leaving one lover for the next.” When she arrived in Kimberley, she thought, “This is where I want to be. This is home.”

He Shaped Who I am. 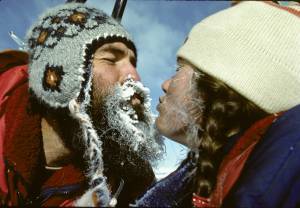 It’s impossible to chronicle the life of Margie Jamieson, without including the legend, and love of her life, Art Twomey. In 1977, shortly after moving to Kimberley, Margie was introduced to Art, who had ​just returned from the first non-supported attempt at Everest. ​Prior to meeting, Margie had some misconceptions about Art Twomey: “I thought he was an 80 year-old trapper living in the St. Mary’s Mountain.” Soon, she fell in love with the man w​ho grew up singing folk songs and opera, held a Masters of Glaciology, and, “possessed a charisma that commanded people’s attention.” She moved into his Ptarmigan cabin in the Purcell Mountains, ten miles from any road access, where, “everything just fell into place.”

“It was a place so beautiful, we thought we should share it,” Margie recalls, describing the origins of the Boulder Hut Lodge. They spent summers building cabins, hiking in supplies, and occasionally, “running across scree and picking up supplies, parachuted by a fixed-wing plane. It was a lot of sweat equity and a whole lot of help from friends,” she says.​ ​Together, they brought back to life, non-mechanised backcountry skiing in BC, where clients skied 10 miles from the nearest road to get to the lodge.

For the next twenty years, Art and Margie ran Ptarmigan Tours, where an intimate clientele followed them on their globetrotting adventures. In the skiing off-season, they took clients glacier skiing and mountain biking in New Zealand, sea kayaking in Fiji and Chile, on game-viewing safaris in Ghana, hiking through slot canyons in the American Southwest, and on horse-supported hiking traverses of the Purcell Wilderness Conservancy.

However, in January 1997, everything abruptly changed. “Art was teaching an avalanche course,” Margie explains. “The helicopter was supposed to show up at a designated spot where I was waiting. When it didn’t show up, I drove back to the hangar on St. Mary Lake Road, expecting to see the helicopter grounded, but it wasn’t there.” With an hour of light left, Margie took off in a helicopter with Kimberley Search and Rescue, and within minutes identified the downed helicopter, embedded deeply into the snowy mountainside, two kilometres from Boulder Hut Lodge. There were no survivors.

Reflecting on that winter afternoon, Margie recalls, “It was just so final. There was no going back from this.” She describes losing a relationship most people dream about, “Art was the love of my life. My soulmate. My best friend. He shaped who I am.”

Robyn Duncan, Wildsight’s Executive Director & Purcells Program Manager states, “Margie has dedicated a huge amount of her life’s work towards conservation and protecting this place we love so dearly. Margie has worked on the land, with the land and for the protection of the land. Her love for the land translates to real long-term protection. That’s an amazing legacy that not many people can claim.”

Margie finds strength in mentoring young people who still have hope, despite the evidence. “​With her strong work ethic,” Pat Morrow says, “especially on the side of conservation here in the Kootenays, she is a beacon for youth who care about the environment and want to do something to preserve it.”

Guess I’ll Just Have to Find Out. 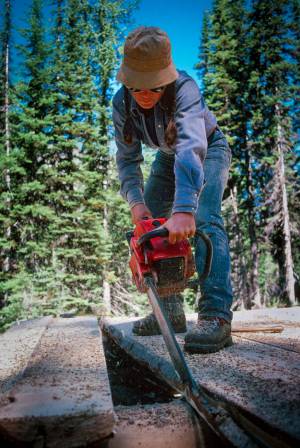 As we tour Margie’s property, she shows me her garden, picks an apple from the tree, and wanders towards the horse-powered wagon she takes on trips in the Purcells. When I ask her about her legacy, she is humble, downplaying the astonishing life she’s led. “I’m just some crazy old lady who’s lived off the grid with her dogs, cats, and horses for 30 years,” she says. Although no longer running Ptarmigan Tours, and having sold Boulder Hut eight years ago, there are no signs of her slowing down. As a Regional Director of Wildsight, she maintains an active role in protecting the Kootenay environment, working on high-profile projects such as Jumbo Wild.

In discussing her recent adventures, I feel like I’ve picked up a hitchhiker on her way to Shambhala. In the last few years, Margie has taken month-long bike trips in Cuba, drove her light team and wagon from California to New Mexico, and is contemplating a trip to Ecuador, or returning to New Zealand this winter. Presently, she is in the process of purchasing, “Amiga”, a 26’ sailboat she plans on sailing to Alaska next summer.

When we reach her unhitched wagon, with a curved, canvas top, and wood heater, she describes her fantasy to one day, go on a long trip with it and her horses. Once again, I feel as if I’ve been transported to another era. I ask her if there’ll be roads and people where she’s going. She looks at me and smiles. “Don’t know,” she says. “Guess I’ll just have to find out.”