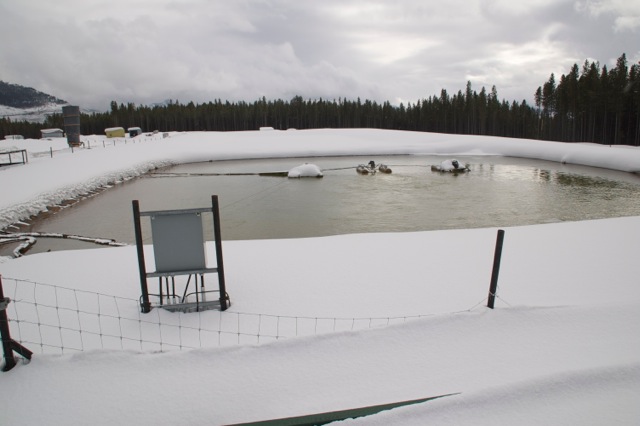 A couple of weeks ago Ryland Nelson  and I visited the upper Elk Valley. We wanted to see for ourselves an area that could become the most intensively industrialized section of Canada’s Southern Rockies. The low hanging pockets of cloud were not exactly what we had hoped for as we loaded up but we had to press on with a reconnaissance mission to an area facing three new massive industrial resource extraction projects. These three projects would be just north and west of the already sprawling open pits of Teck Coal’s Fording River and Greenhills operations.

The road on the east side of the Elk River was gated about 25kms north of Elkford so we unloaded Ryland’s snowmobile and started to tandem ride along the powerline and up the ‘zipper’ to an area locals refer to as ‘Stormcat Flats’. We rode on above Stormcat Energy’s pilot coalbed methane site to gain the ridge above the Elk River and see if we could get a view of Centremount Coal’s Bingay Creek mine proposal site as well as the area proposed for Teck Coal’s Fording River mine expansion dubbed ‘Swift’. What we found on the ridge was a well-traveled wildlife trail an old rime covered shack filled with snow and a pretty clear understanding of the grim reality this section of the valley could be facing in the very near future.

The clouds were too thick to be able to see much of the Fording River Valley but we could hear the mine loud and clear. We were able to get a good look at the Bingay Creek mine site. Some shipping containers left behind showed us just how close to the Elk River this mine would be. This mine would be at a very narrow point in the valley bottom and would cause impacts on water and wildlife that could not possibly be mitigated or managed.

We found only one active well at the coalbed methane site. They are ‘treating’ their wastewater by aerating it in an open pond. The ‘treated’ water continues to be dumped into Brit Creek, a tributary of the Elk River, as has been the case for over a decade now. Rust coloured iron oxide filings can be seen in the outflow channel and the treatment pond is a sickly mustard orange colour.

The reason we wanted to have a look at the Stormcat operation firsthand was due to the lack of response to repeated phone calls and emails to the company. We weren’t sure they were even operating the project. Their website is down and their parent company in the US filed for bankruptcy a few years ago.

We headed back to Fernie wondering how and when we are going to stop treating these massive industrial projects as individual, isolated proposals. We need to understand the cumulative impacts from all of the existing and potential human activity in BC’s Southern Rockies.

A century of mining and other intensive human uses of the Elk Valley have had a significant impact on water quality in the river and on wildlife habitat. We are already past thresholds for negative population effects from selenium in the Elk River. We must act now to protect critical habitat and ensure that the amazing variety of life that we share this beautiful place with will not just survive but thrive.

The proposed Southern Rockies Wildlife Management Area is a critical piece needed to strike a balance in the region and put a priority on wildlife. If you have not done so already please sign on as a Friend of the Flathead and use our action centre to let your favourite decision makers know that you support the vision for protecting and connecting BC’s Flathead and Southern Rockies.