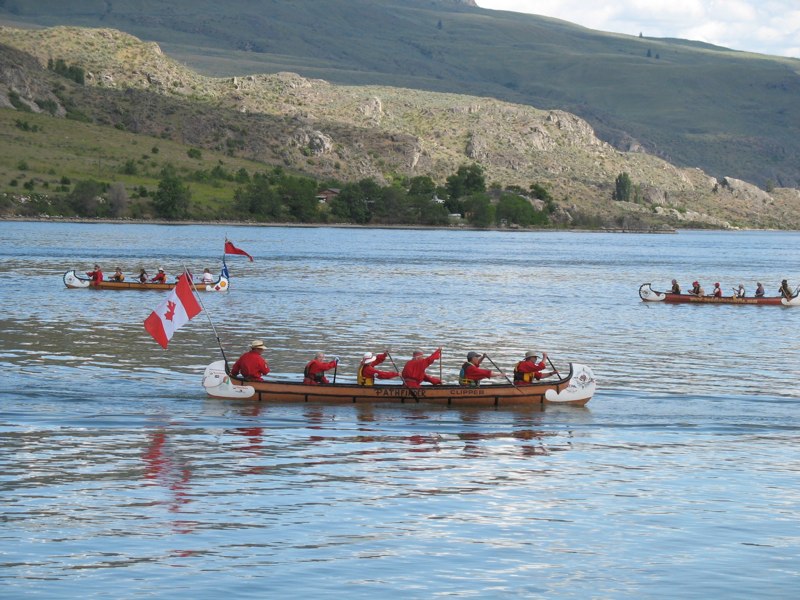 By Megan Kinley, Summer Student, Lake Windermere Ambassadors My experience on the David Thompson Columbia Brigade, a six week long canoe trip following the traditional fur trading routes of David Thompson from Invermere, BC, to Astoria, WA, was truly amazing. It was a journey that taught me a lot about our Columbia Basin, as well as myself. To those of you who don’t know what brigading is, you basically paddle six hours a day, then sit around, eat, visit, party, and sleep. Tough. I am filled with jovial memories of late nights of playing and enjoying melodies, new found friends, exhausting yet rewarding days of paddling, and the hospitality so many people showed us. On my first day on the Brigade, I was thrust into the middle of it all, an unsure 15 year old who had never met any of the people I was about to be living with and relying on for the entirety of my trip. By the end of the first day, I realized why I had wanted to take the plunge, and was having the time of my life. My paddling partner was John, a hilarious sixty something guy who would spontaneously burst into off-key song. Some of many other stand-out characters included on our team: Sam and Christine, a sweet old English couple, Dennis, a marathon paddler, Ray, who had only started canoeing a few weeks before, Brooke, our fearless leader; and 14 year old Andrea, who became instant friends with me after I started playing guitar (she sung.) I started out on the brigade doing just a two-day segment, to get a feel for what the life was like. I quickly realized that it was one of the best things that I had ever done in my life, and rejoined later for six more days, from Richland WA, to Maryhill WA (population 98.) One of the most memorable experiences of the trip was bringing my guitar along, and meeting people through music. It was amazing to see how much it brought people together, and I loved playing for and with other people. It was also something that increased my confidence, because I got used to playing in front of many people, most of whom I didn’t know to begin with. Listening to other people play traditional voyager music, with bagpipes, drums, and fiddles was also extraordinary. Along the way on the trip, I gained understanding of the modern and traditional values of the Columbia River, as well as the diminishing health of it the closer we got to the ocean. Today, especially through the desert area, the river is a necessary part of life. It is ingrained in peoples’ lives, both functionally and recreationally. It provides an economy for the region through irrigation, and fishing, as well as bringing in money from tourists due to the major boating and swimming values. Historically, the Columbia River was also a huge part of the lives of many people. It provided fur trading routes, as well as sustenance for those who resided along it. Traveling in voyager canoes with around 100 other people, being part of a journey nearly 2000 km long, through a basin that covers 671,000 square kilometers was one of the most wonderful experiences I’ve ever had, and I learned a lot about myself, felt a new kind of independence, and the importance of an intact river basin. Through all the people, noise and commotion though, I found a new kind of peace.