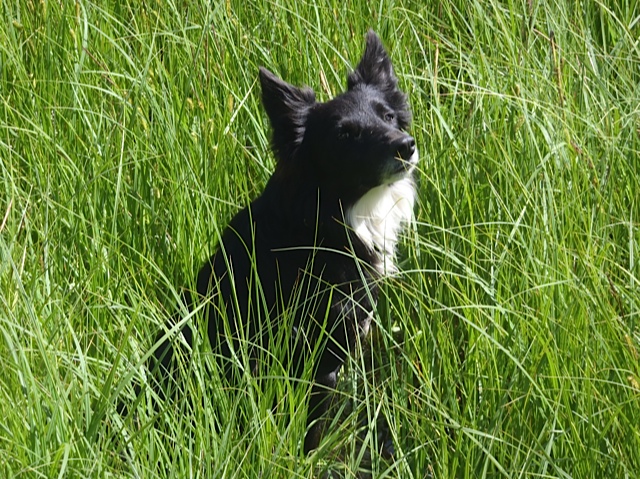 A Wild Canada Day Weekend in the Flathead

Pema sits, ears up, at full border collie attention.  Her gaze intense as her head moves back and forth. To the left, a whitetail doe is approaching within a dozen metres, alternatively nibbling and staring inquisitively at the two of us sitting in the tall grass. Far to the right a couple of young bucks with velvet crowns occasionally peer in our direction. Between the two, a silver backed bear has his head down grazing the fresh grasses and forbes.  Pema’s excitement is palpable, but I’ve told her to rest, and she gets it.

Yesterday, likewise feeling forced to restrain herself, she climbed along the edge of an avalanche track that still extended its snowy fingers to the old exploration road that lead us up the valley. Above were a herd of a cow elk with their calves browsing the newly available vegetation on the lip of a small subalpine basin. But like today, Pema could only observe.

After bounding up a snowy slope she waited patiently on the ridge for her lumbering partner to join her across the divide.  We sat together for three quarters of an hour watching a nanny goat encouraging the antics of her tiny white offspring amidst the rocky slopes.

And just this morning she stared in amazement as her foolish friend ran nose to nose into a cow moose ambling into camp.

But this is different— this time there is a lot more going on. The doe appears fascinated with us, the bucks occasionally glance our way, and the griz appears completely oblivious to our presence—– until with his nose in the air, we find ourselves directly in his line of travel. I think its time to let him know who we are, because he obviously knows where we are.  Both Pema and my concentration is now focused in one direction. I stand up and the bear, rather than doing the same (which I believe is proper protocol), goes into overdrive— from an amble to full run in an instant. Pema watches intently without moving.  I slide my hand down to the bear spray in its holster. He’s coming fast— but still 20 meters away. I yell, in that authoritative way one does with a misbehaving critter, “THAT”S ENOUGH”.  This time he gets it, and keeping with proper protocol, veers sharply to his left crashing off into the bush.

Pema looks up at me.  I know we’re not done.  She wants a closer look at those bucks still grazing on the far side of the meadow.